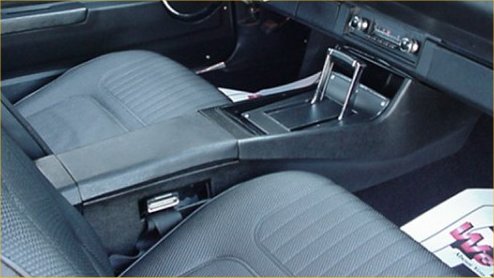 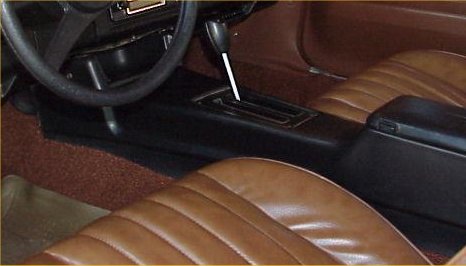 The 1970 - 1972 console is a hard plastic, multi-piece unit with integrated seatbelt holders. It was available only in black. It is retained to the transmission tunnel via 3 unique stamped steel brackets. When a car was ordered with an automatic transmission and no console - the shifter will be on the steering column. This is one way to figure out if your car came with a console or not. The other way to tell is there will be threaded inserts for the console brackets installed in the floor.

The console shell is the same regardless of which transmission was be used.

The 1981 console is unique in that the "change/shades storage cubby-hole" under the radio is blocked off in order to cover the ECM. Click here to see a closeup of the reshaped console.

If you put your mind to it - you can install early consoles in newer cars, and newer consoles in older cars - if you include the bracketry and the correct shifter.

A rear console was only available in the Firebird. Occasionally, you'll see these in Camaros.

Console Tech
Removing the shifter handle
On an automatic car 1973 - 81, there is a button on the top of the shifter. This is a slip fit onto the shifter stalk. Place a small screw driver under a slot in the button and the shift knob and lever the button off.

Now, the shift knob is retained onto the stalk with a snap ring. You need a pair of snap ring pliers to remove this. Or, the lowbuck approach, a pair of needle nose pliers and a small screw driver will remove the ring. Once the ring is off, the shift knob can be removed.