Exhaust System General Information
The exhaust system is designed to be cheap to build, keep the car quiet and be durable. Two pipe diameters were used. Typically exhaust pipe diameter was 2". High Performance applications got 2.25" pipe.

Note on above:
The above diagrams are taken from a NAPA exhaust catalog. They look like a duplicate of what's in the GM parts book, except with aftermarket part #'s assigned to the pipe sections.

Exhaust Manifolds
All Camaros used cast iron (log type) exhaust manifolds. They're designed to be durable, quiet and allow for easy access to the engine. They are not optimized for performance.

Exhaust manifold usage is identified in the specific engine sections.

Mufflers
Nearly all mufflers were transverse type, tucked sideways between the rear axle and front of the gas tank. They're designed to keep the car quiet.

Resonators
Technically not a muffler, these were used on the 1977 - 1981 Z28's. The Z28 got a pair of resonators (fed from a single catalytic converter) and had individual tail pipes. The resonators were hung under the rear seats and helped free up some power and gave the car an aggressive exhaust note.

Catalytic Converters
The catalytic converter was introduced on the Camaro in 1975. As such, no Camaro after 1975 had "dual exhaust". Everything had to go through a single cat, and in most cases then went to a single pipe back to the muffler.

Emissions Equipment
ALL Camaros had "emissions equipment" of some sort on it. Since it's designed to reduce exhaust gas emissions, it's mentioned here, but due to the complexity of these systems, and the fact they inter-relate to various other systems, they are discussed in a separate section.

From an exhaust system standpoint, the major emissions systems are the Catalytic Converter and the A.I.R. pump (aka smog pump).

This can go several different ways. I'll elaborate on all of them at some point. This section will be geared mainly to the guy that absolutely has to have the correct part # on his tail pipes.

Some people don't mind going to napa and buying the cheapest muffler and tailpipe on the shelf. That's economical, will get the car servicable, and often times the pipes are still coming from the original source. $20 bux and you're back on the road in good shape.

Some people dump all the regular stuff into the trashcan and put headers and a performance related exhaust system on the car. That's discussed elsewhere on the site.

Some people want 100% correct.
You'll need to check the original number information in the section above, and contact one of the companies (mentioned elsewhere) who sell 100% excellent and accurate exhaust systems. 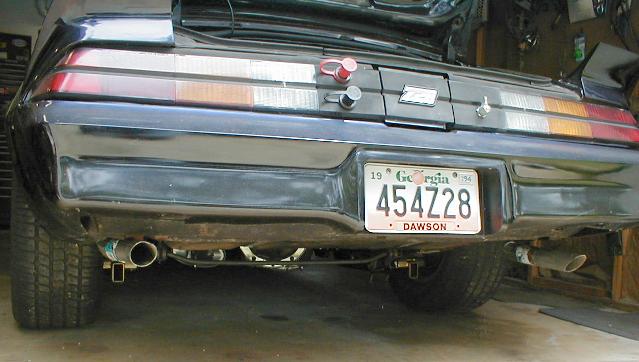 Other stuff to keep in mind:
Noise.
Legal aspects.
Working on the exhaust can be a major PITA. In most cases, the exhaust system will rust to heck and need to be cut off with a sawzall.