I bought 14 original tall lug nuts off ebay yrs ago. Never been able to found six more, and have never put on my car. Hopefully some day they will be reproduced.

The last set of lugs I know that traded was $1200 and they went on a LS6 Chevelle.
The big money cars on the lugs are 70 LS6 Chevelle, 69 Chevelle SS & COPO, Oldsmobile open face wheels for W30's, HURST OLDS etc, NOVA SS 69-70 , and 70-74 Z28's, maybe the buick GSX?
The original manufacturer was T/R Townes Robinson Fasteners, I have copies of all of the patents and assignments to T/R beginning in 1966.
I have talked to multiple companies about the deep draw dies. I figured there was 1000 set demand IF you could sell them for $150/ set - PERSONALLY I would give the $400 Fuller was charging and there is probably a pent up demand for +/- 100 sets at $400.

Do you think the blanks would need to be annealed at any point?
This led me to trying to find half drawn annealed cups as a starting point where I could build less tooling.

I was hoping that perhaps the SCOTT FULLER die set would have one or two initial draws which were undersized and thus perhaps only require one more set for completion.

As an aside - The change after the introduction of the new part# 414 between the 2nd and 3rd itteration of the lug involved an entirely different manner of attaching the stainless cap to the lug. on the 3rd itteration it was resistance welded.
I have all of the drawings and patent information on that modification as well.

I have seen similar lugs on other brand cars, I imagine any car with a 7/16 RH threaded wheel stud and capped lugs from the era would have had them.
The 1/2 threaded version used on the BOSS Mustangs did not have a FORD part number -
B

Where did you get them?
J

They look close enough for me,,,where did you find them?
B

eBay… believe it or not. 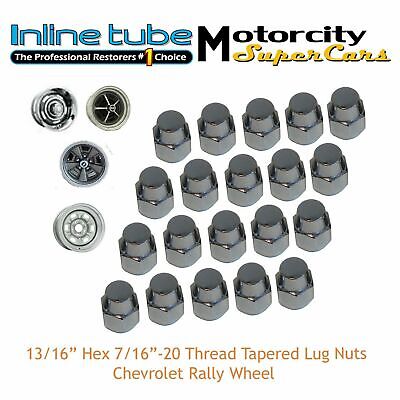 Do they have the steel jacket or are they one piece? I can't tell from the pics on ebay. Thanks
B

I bought the lugs on the left through Summit, dropped shipped from Classic Industries. I just added them to my other Summit purchases for the free shipping.
B

BillyDean7173 said:
Do they have the steel jacket or are they one piece? I can't tell from the pics on ebay. Thanks
Click to expand...

They’re one piece, but that didn’t matter to me. I was only looking for the appearance and function.

BL535370Z28RS said:
They’re one piece, but that didn’t matter to me. I was only looking for the appearance and function.
Click to expand...

Perfect! I don't want the steel jacket anyway, even if the originals had them. I went with some knockoff one piece lug nuts years ago from a swap meet just because I didn't want the jacket to get stuck in my lug wrench or impact.