73rsltz said:
Oh yeah. My car is almost done. My brother installed the exhaust from Joey yesterday. Should be starting it up soon.
Click to expand...

Did u weld the exhaust or just use the clamps? Joey recommend i weld mine which I didn't do, wanted to be able to remove it if i had to and didn't want to burn the chrome on my tailpipes also but i have some leaks on the tailpipes and the intermediate pipes that I can't seam to get sealed up
D

try this to seal up the exhaust

Interesting stuff. Is it flexible so the joints moving do not crack?
That stuff could be a great fall back plan to always have on hand like JB Weld.

Found the first casualty among the parts I'd hoped to save, but it's really no surprise.
When we sent the block and heads in to the machine shop, we found the end caps in the trunk, sitting in the oil pan, which had been collecting water for 15 years. The end caps were very badly rusted, but they saved them.
However, while sandblasting the oil pan, I found it was completely rusted through around the drain plug. 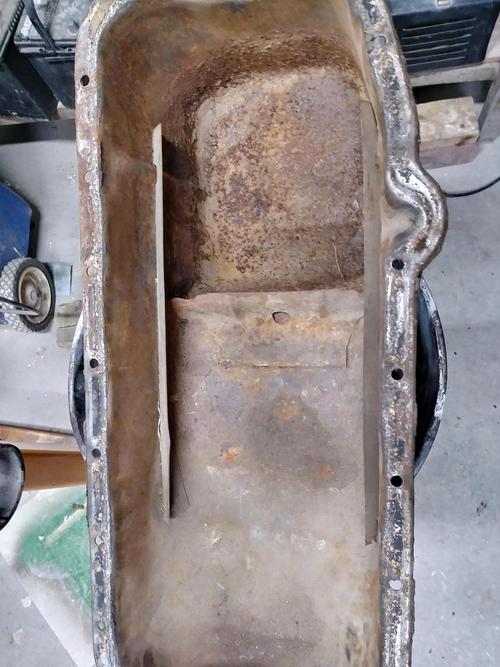 So far, I haven't had any luck finding a new one with the correct baffles. Few sites show the inside of the pan, and all that do have the full tray.

Got a few more parts cleaned off yesterday, and while waiting for the compressor to catch up, I decided to clean out the body of the 14 years worth of dirt and leaves that has collected inside the trunk and cabin along with the parts stored there.
I found a few small rust holes in the trunk, and one or two in each rear floorboard. None big enough to even put a finger through. Nothing near as bad as I expected to find considering how long it's been exposed to the weather. 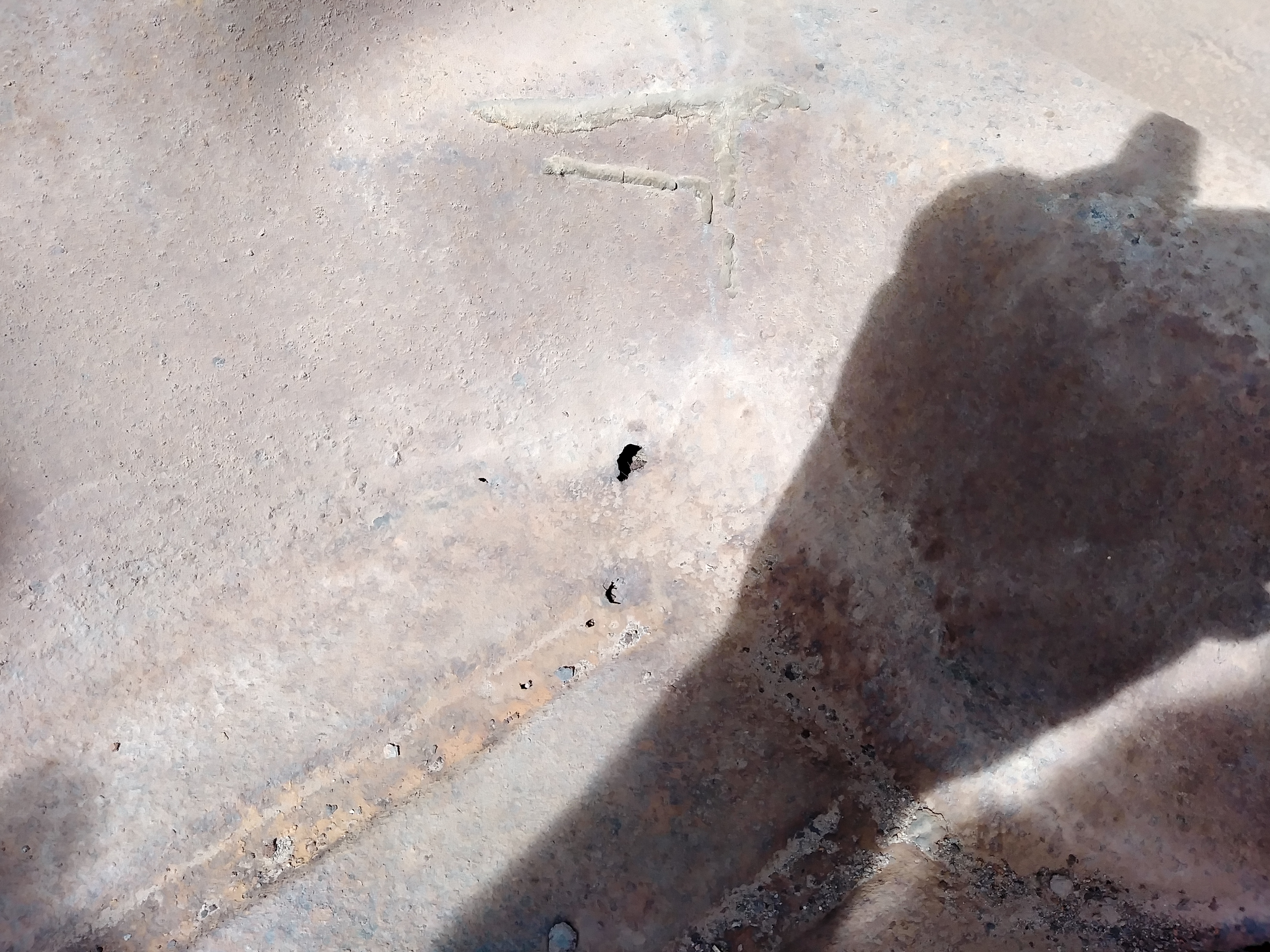 We'll get a better idea how much patching will be needed once we get it on the rotisserie, but I'm feeling a lot better about it.

On another note, I'd been doing some research into the VIN, body tag, and engine code, trying to figure out as much as possible as to when my car was built, using the great information on the Camaro Info tab on this site: http://www.nastyz28.com/camaro/camaro73.html
That is an amazing treasure trove of information!
I know my engine was assembled on July 16 (V0716CLJ) and the 2nd stamp matches my VIN.
According to the data page, 96,751 Camaros were assembled for the 1973 model year, and mine was very close to the end of the run (95,199). The body tag is stamped 07E, for the 5th week of July. According to my trusty calendar, the 5th week of July 1973 consisted of Sunday the 29th, Monday the 30th, and Tuesday the 31st.
I don't know if assembly line workers were working Sundays in 1973, but in either case, I guessed mine was likely built on the 30th.
And then, while sorting through parts yesterday, I find this: 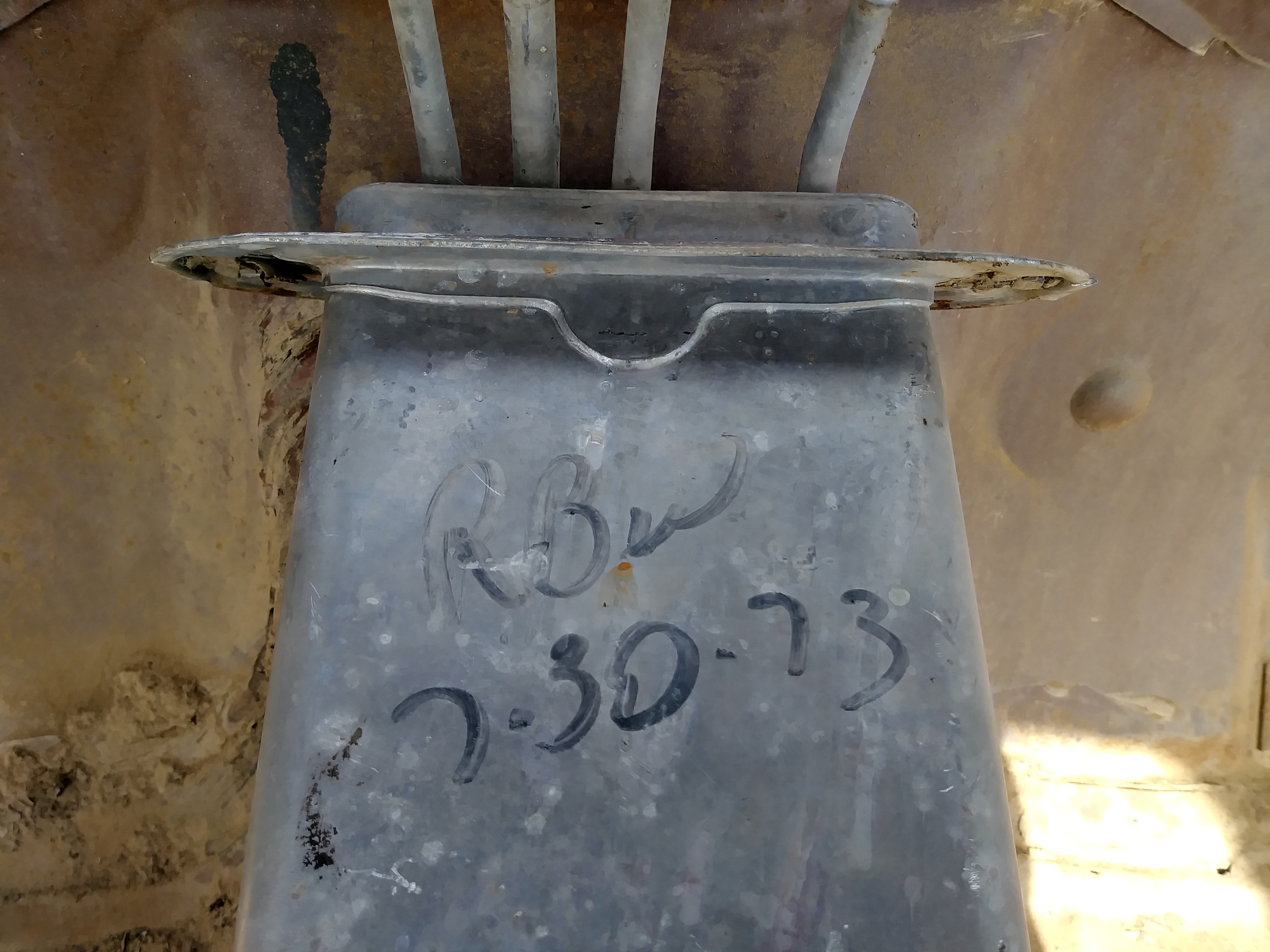 Mystery solved, eh?
I'm not sure what the part is, or what it does, but it mounts behind the back seat, and the hoses connect to the fuel system.
I think, when we reinstall that part, Dad and I are going to have to initial and date it below RBW.
Now I'm wondering who RBW is...

Might want to do the ice pick test on the rest of the trunk floor.
Pretty sure the plastic part is part of the sealed gas tank evap system. Kind of a "catch can" for fuel vapors and liquid gas when the tank was filled up and it sloshed around.

70lt1z28 said:
Might want to do the ice pick test on the rest of the trunk floor.
Pretty sure the plastic part is part of the sealed gas tank evap system. Kind of a "catch can" for fuel vapors and liquid gas when the tank was filled up and it sloshed around.
Click to expand...

No updates this week, work got in the way. Best thing about moving out of Production and into Engineering was that I finally didn't have to work Saturdays anymore. Well...I guess I should say that I could work on what I WANTED to work on - so I started spending my Saturdays with my Dad, and my Camaro.
I guess it's to be expected that work will still get in the way once in a while. Spent all Friday night on a plane to Munich, Germany and Saturday morning on another plane to Zurich, Switzerland. This morning (Sunday) hopped a train and taxi to Balzers, Liechtenstein (a tiny country sandwiched between Switzerland and Austria). I'll be here until Friday doing training on a new product line.
Funny, that as soon as I got internet at my hotel, I sent some messages home - and then came directly to the Nasty Z28 site. I'm not addicted (much) am I?
Hopefully, I'll be recovered from jet lag enough on Saturday to spend some more time on the car.