Chuck
Glad to see you posting again. Isn’t it great to be able to get Christine on the road again. I’m sure the inspection will be a joke probably some young kid that doesn’t even know what he is looking at doing it.

Christine is ready for registration for the first time since November 1988. More at the bottom

What I thought would be a major pain (door glass) was the easiest work and others (wiper arms and parking brake) turned into major pain. Then there were the inevitable unknown problems

Fuel Line: Replaced the short length of fuel line from the metal supply line to the fuel pump. While looking over the area I saw a short area with a very slight diameter reduction. Ran my finger over the area i could not see and felt a reduction greater than 50%

proportioning valve: Another surprise, when I attached the electrical connection on the switch, the brake warning light came on. No idea which inlet side of the horizontal piston was closed off so took a guess and bleed the left front to let off pressure while a neighbor worked the brake pedal. After a couple of bleeds the light no longer came on. Bleed all four brakes with a lot of air bubbles coming out of the rears. Then went around the horn for a final bleed on all four. When finished had poured 16 oz of fluid into the master cylinder, most in the rear

Door glass now rolls up good: Had been a major pain since last summer. Yet this time the LH only took one adjustment. The RH took three but all were front-rear tilt. Both now roll up firmly into the seal with a good fit at the rear curves for the window and seal.

Wipers were a MAJOR pain. When the 2017 installed wiper motor was started, hood up and no arms installed, I could hear the transmission banging. Seeing the location of the LH key the arm could not install in the correct position. Removed the piece with the ball stud, rotated 180 degrees and the transmission no long hits anything

Installing the arms, Rh was on in two tries but the LH was not installed after far too many tries Thought the LH would be easy because of the keyway,

With the hood down, turned on the wiper motor and arms moved upward only a short distance before the top edge of both jammed against the underside of the hood. (has stainless steel trim). Raised hood tried motor again and the left arm swept against the LH windshield trim. Turning the motor off the wipers did not park. The LH arm came off Turned the switch back on, wipers moved slightly downward to park then normal sweep.

Second replacement motor.installed
---Finally got the pesky LH arm on. Still only covered 2/3 of the post spline. Probably some gnarled arm splines. Placed a piece of wood on the end then used a small hammer to hit the wood (not hard) till the post splines were covered
--- adjusted the wiper path till it no longer hit the LH window molding
----The arms no longer hit the underside of the hood. Adjusted the three bumpers on the cowl
Next day checked motor-park but the motor did not run. Checked power getting to the motor. Next with the two speed leads removed, checked continuity on each to ground with switch off, Lo and Hi getting continuity readings as they should be Got a third replacement

Third replacement Bench tested the third replacement and it was good. When securing the motor to the firewall the screws were not very tight. Got me wondering if the motor-firewall ground was not too good. Decided to drill out and tap from #8-32 to #10-24. While setting up a neighbor's table top drill press, I discovered the holes are #10-24. With the right screws it now runs fine. Geeze..!

Motor into Park: Arms now move into park below the hood. Removed the RH wiper arm and positioned it 1" below the blade stop, set wiper sweep, raised the RH arm over the stop. With the hood down the outer tip is just barely visible. Called this good

Wiring route - RH rear lights: Modified the wiring going to three RH rear lights to get a cleaner look. This bundle of wires had always routed around the outside edge of the trunk lock bracket. The three light sockets do not fit through the bracket side but the wires would so I cut them. Instead of the one long single ground wire for all rear lights, it was cut to have a ground wire for each side. While splicing the wires back together I was amazed how clean the almost 50 year old copper was.

All is ready to register Christine. Will register as an antique using a set of 1971 plates courtesy of member "Adams". Emailed the tax office about registering the Camaro for the first time in 33 years and 6 months. Their reply was the photo of the plates shows them acceptable but the title photo was forwarded to the state DMV for the title to be reactivated. The tax will notify me when reactivated and I can then register at a local tax office.

Until the title is reactivated will remove dried buffing compound, wax the paint and treat the vinyl top
Last edited: Jun 7, 2021
W

Chuck
I’m glad to hear you finally got the bugs worked out enough to get her street legal. If your weather down there has been as rainy as our Dallas weather has been you won’t be putting many miles on her for awhile.again Congratulations

wnmech said:
Chuck
I’m glad to hear you finally got the bugs worked out enough to get her street legal. If your weather down there has been as rainy as our Dallas weather has been you won’t be putting many miles on her for awhile.again Congratulations
Click to expand...

Thanks Rick. After getting registered, first order of business is fill the tank at a gas station then several good runs to thoroughly test everything and clean out the engine

It's great to see that Christine is almost back on the road! Let me know when you are doing your first drive and I can swing by to take pics if you like!!

Da-bigguy said:
It's great to see that Christine is almost back on the road! Let me know when you are doing your first drive and I can swing by to take pics if you like!!
Click to expand...

I would like that. Will let you know. Unknow how long it will take DMV to reactivate the title

Chuck71RS said:
I would like that. Will let you know. Unknow how long it will take DMV to reactivate the title
Click to expand...

Hopefully not too long. I do expect to be around Houston until mid July when my next likely offshore campaign is supposed to start so hopefully before that. If not then it will have to be around the middle or end of August when that job is expected to finish.

11 June: Registered and on the road

Tax Office Yutz
Registered as an antique using 1971 license plates at a local Harris County tax office. A couple of times it looked like it might not happen because of the yutz handling my matter. but I was prepared

She asked for a variety of documents including the title which I already knew to bring. She then asked me for the VIN and I replied it is on the title

Then I could not register because the Proof of Insurance does not have the VIN. I put my finger on exactly where the VIN is

Gads......!! Good thing I was prepared. I kept my reaction under control and walked out with a renewed registration and a 5 year license plate sticker tag

Da-Bigguy came over: Called Da-Bigguy (Andrew) when I got home and he came over to help and photograph the first legal drive, in 32 years and 6 months to a gas station 4 blocks away. Sure had a lot of difficulty getting the front seat bolted to the floor pan.

With the seat and steering wheel installed he photographed the replacement of the old plates (1988) with the even older 1971 plates.

To the Gas Station and back: Andrew then shot mp4 of me backing the car out of the garage to the bottom of the driveway. I thoroughly enjoyed the video Andrew. Drove to the gas station and Andrew followed in his truck. Some more photos taken there. Driving the Camaro on a 6 lane road for the first time in more then 32 years was quite a rush but I kept my focus on driving. During the drive there and back did not hear and feel anything unusual. By that time people were getting off work with a lot of traffic on the road. In addition with no seatbelts installed and the power steering pump belt needing more tightening decided no more Friday drive

Now I can finish Registration plus the first drive, though short, was a major milestone and I now have no difficulty spending what is needed to finish

Finishing Sequence
1 The Vintage Air system purged and charged. But first, fixing alignment of the compressor pully with the crankshaft pulley is needed. The compressor pulley is turned away from the crankshaft
2. Carpet install. Have the already purchased and recolored carpet installed at a shop. This will involve cutting and sewing relief seams. Want the ac system operating first for if there is a problem and the evaporator has be to removed don't want coolant on the carpet
3. Stereo install: Encountered a variety of problems and various tests to isolate components became confusing so going back to square one
4. Install the rest of interior parts; lower dash, remaining seats, door panels and door seals. All of the parts are ready
5. Have rear tail pipes bent to obtain symmetry. Might cut off the pipes at rear panel. Still to be decided 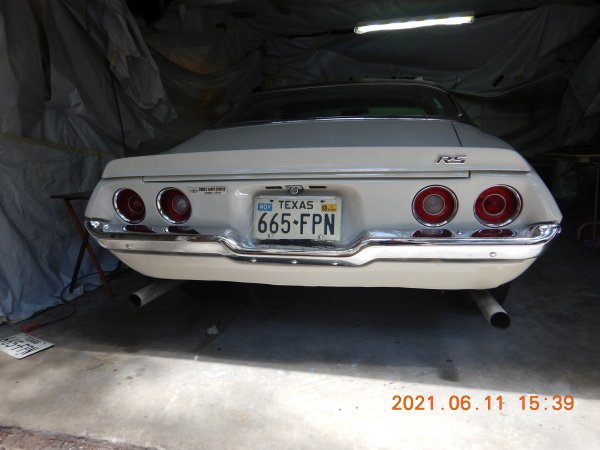 On goes the older plates from 1971 (courtesy of member "Adams") 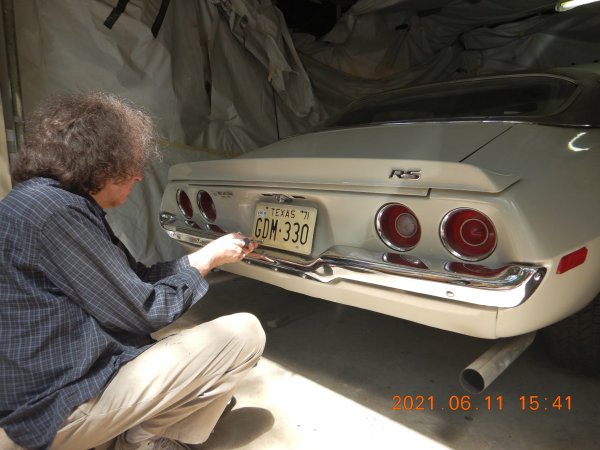 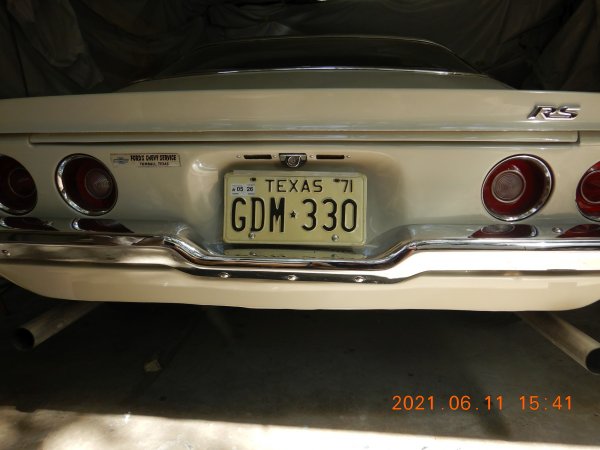 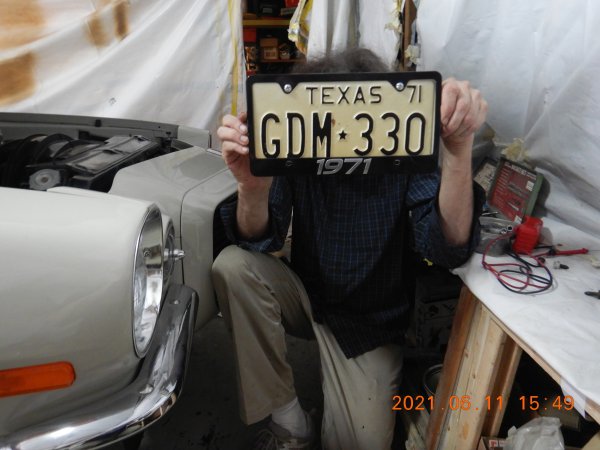 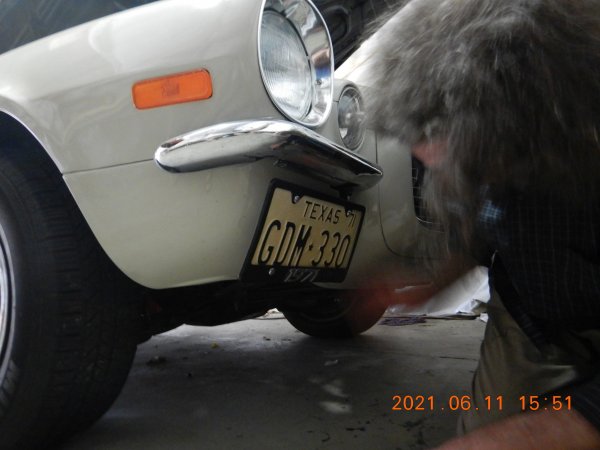 Heading to the Gas Station (Trimmed back the vegetation on the right. Had trimmed it just 5 weeks ago. 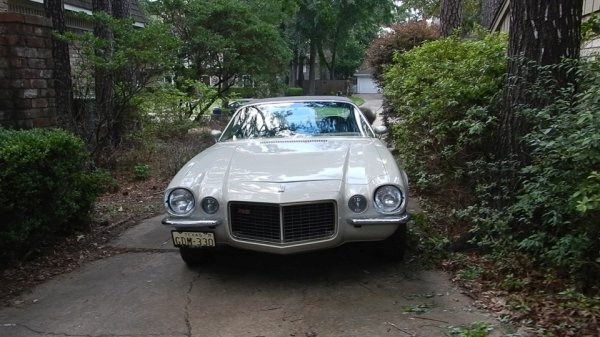 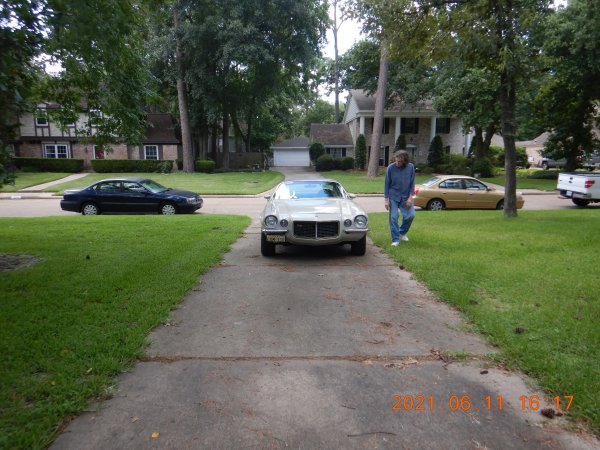 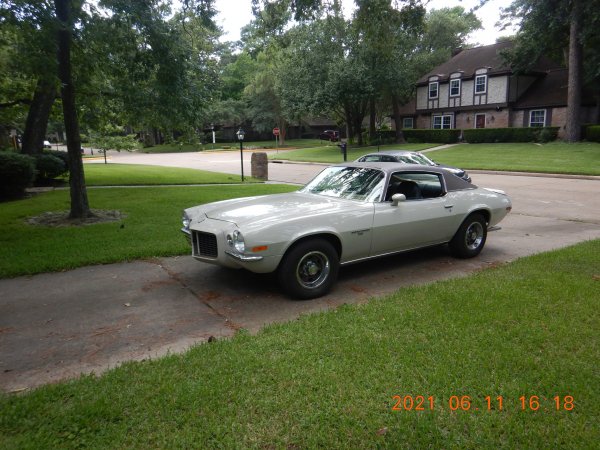 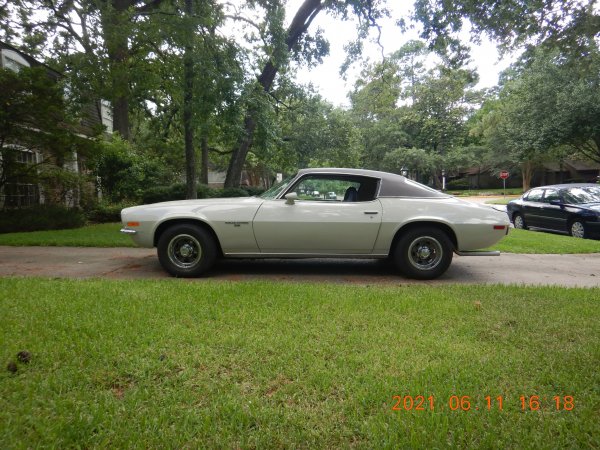 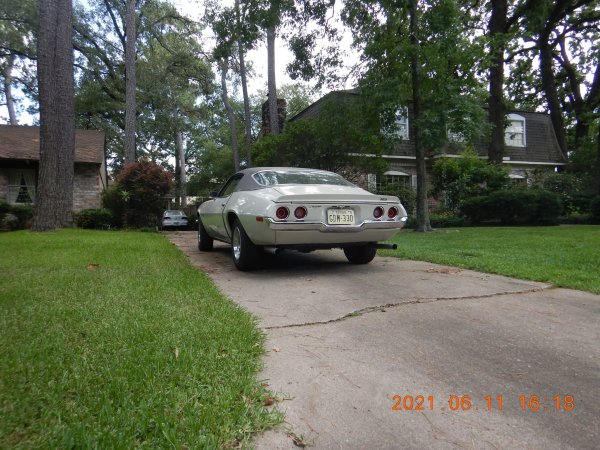 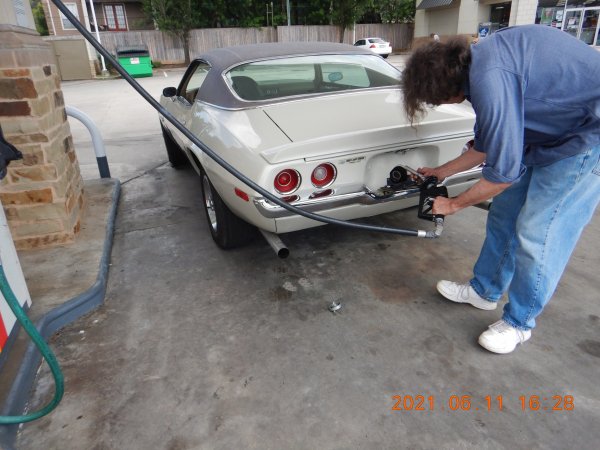 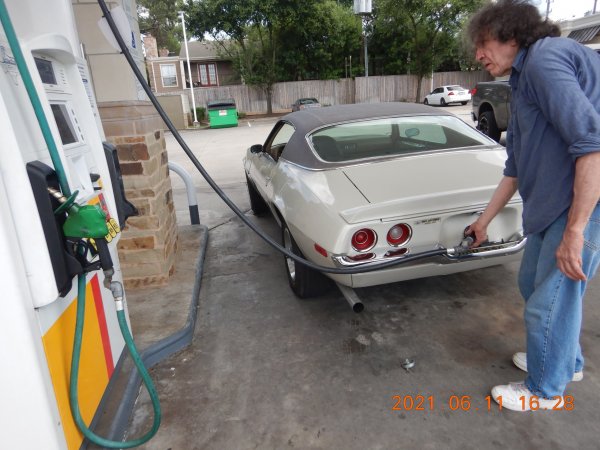