Took this off of the 75 to be used on the 77 restoration. I'm stoked they never even pulled off the tape backing and had the riveted on LT Badge. 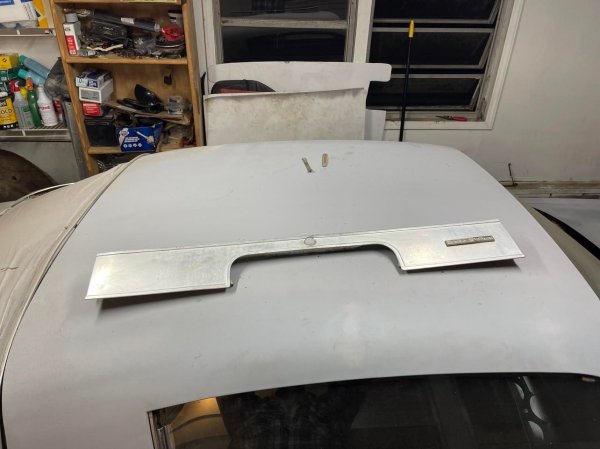 I think I also discovered why the rot is where it is on this 75. Looking in the trunk, the PO cut out the old rear quarters right where it is rotted and welded them back on, instead of doing the whole quarters. This is where the rot is and a great example of a very bad repair.

Well, I picked up a new to me 75 Rally Sport a few weeks back.

External body is rough, no title (one can be obtained) no engine no tranny or driveshaft. But, it has all of the parts I needed to finish my 77 restoration. PO already installed new brake calipers and pads and has a pristine headliner, good lower valance, and inner fender for the passenger side. the control arms look like they've never seen any moisture so at some point I may use those too.

I have already removed the rad support from the 75, and boy that was a job. Looks like I'll need new bushing for the lower radiator before I reinstall on the 77. I was going to use the entire doors and switch them over but the rust i think is just as bad on the 75 as the 77, so I will have to find a video to remove and re-install just the glass on both sides. My driver and pass glass is pretty scratched up.

Frame to Radiator support bushings (I may change all four subframe bushing, we'll see how difficult that is with the engine in the car)
Window sweeps on both doors


IF and its a big IF, I decide to replace the 305, I "may" switch the front subframe, but I haven't decided. The 75 RS subframe is basically rust free compared to my 77.

I will have a good amount of usable parts left over.

A silver center grill.
Lower chrome body strips
At least partial door panels
2 upper Valances (One needs repair but usable)
The gauges and gauge cluster assembly
Possibly a horseshoe shifter if I decide not to use it.
and more..

I haven't decided if I'm going to keep the 75 RS frame and what's left or not. The frame is in really good shape. What would you do?

Here is a look at the 75 in the backyard after I removed those components.

I forgot to mention the 75 RS had a new Master cylinder installed. They had removed the Prop Valve and bolted it direct to firewall. I dont know why someone would do this.
For now I commandeered the master cylinder cover and latch. Not sure If I'll bother with removing the entire assembly since my brakes were working on the 77. Just needed the cover and spring with new rubber seal for now.
Last edited: Feb 14, 2022

The 77 was pretty scratched up, so I used the better 75 glass.What fun to do four in a day.

Prepped the 75 Radiator support and painted it, removed all of the rust for when It's ready to go back in the 77. (Photo in next post)

Now to order window felts, and rubber bushing for radiator to subframe to put back in.

If I have the energy tomorrow might take the new calipers from the 75 and install on the 77, We shall see.

Also need to remove the headliner from the 75 which is in great shape and use that in the 77 as well.

A little at a time.

Of note was that the door panels from 75-77 are not the same.
The door handle eschechon on the 75 was metal and bolted to the door, the 77 has the plastic type. Big difference in design there I noticed.
Last edited: Feb 25, 2022
P

Great build, the main thing is that you are enjoying it and we can see your passion. Please post more pics for each task and at at each stage. You will be able to look back and enjoy for years to come.... also if you ever sell the car it's undisputable documentation of what was done. You'd be surprised how much energy can be mustered up from a passionate obsession.

Thanks for the Reminder Procharmo.

Sometimes the tasks can be a bit overwhelming, like changing out and realigning four windows in one day by myself.

I do forget to document them well. Yours is a very good reminder to do that for sure. I appreciate that very much. I'm going to get started here again soon, so I will certainly do a better job. If not for anything for prosperity. Documentation does lend value also. (Sure wish someone would have saved the build sheets for the two I picked up, but what can you do.)

I ordered the Radiator support bushings Monday from NPD here in Charlotte N.C. and they arrived yesterday. I will update with some pics here this weekend and more information. I debated whether to buy the whole bushing set for the subframe, and opted to just do the radiator bushings for now. I don't think its something Ill regret, it just means when and if I order the rear subframe bushings in a kit later I'll have extras for the front.

BTW, Just watched your videos of the Super 77, outstanding!! 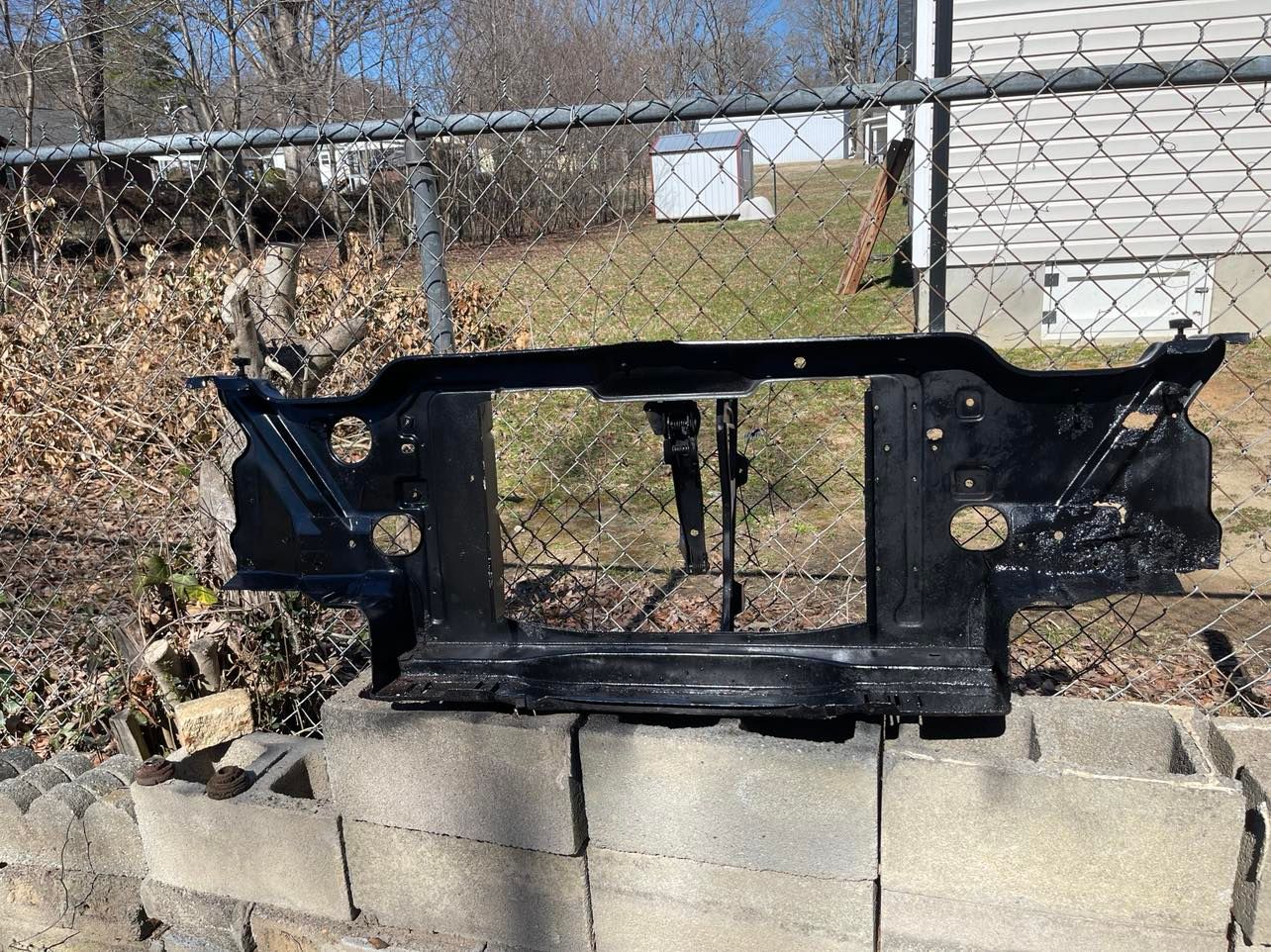 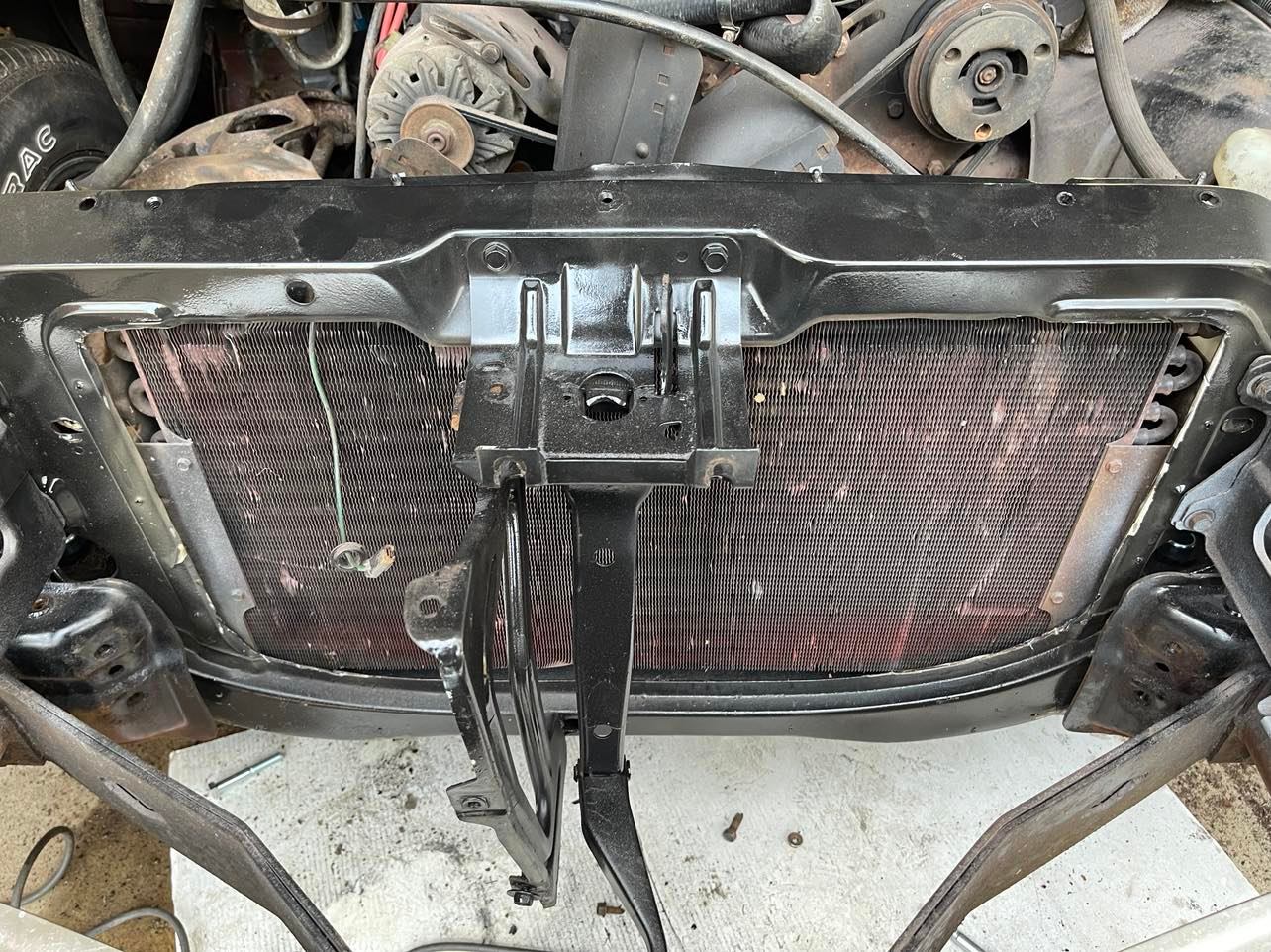 There is a bar that goes in front of this rad support. Does anyone happen to know what bolts those are? I'd like to replace them but cant seem to identify exactly what they are in the AMK Catalog or otherwise or what that cross beam is called.

This second photo is a drawing of the cross member and what Im looking for. 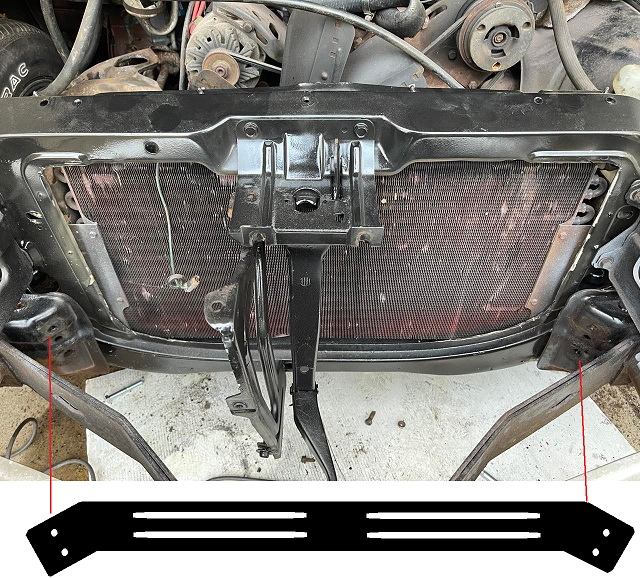 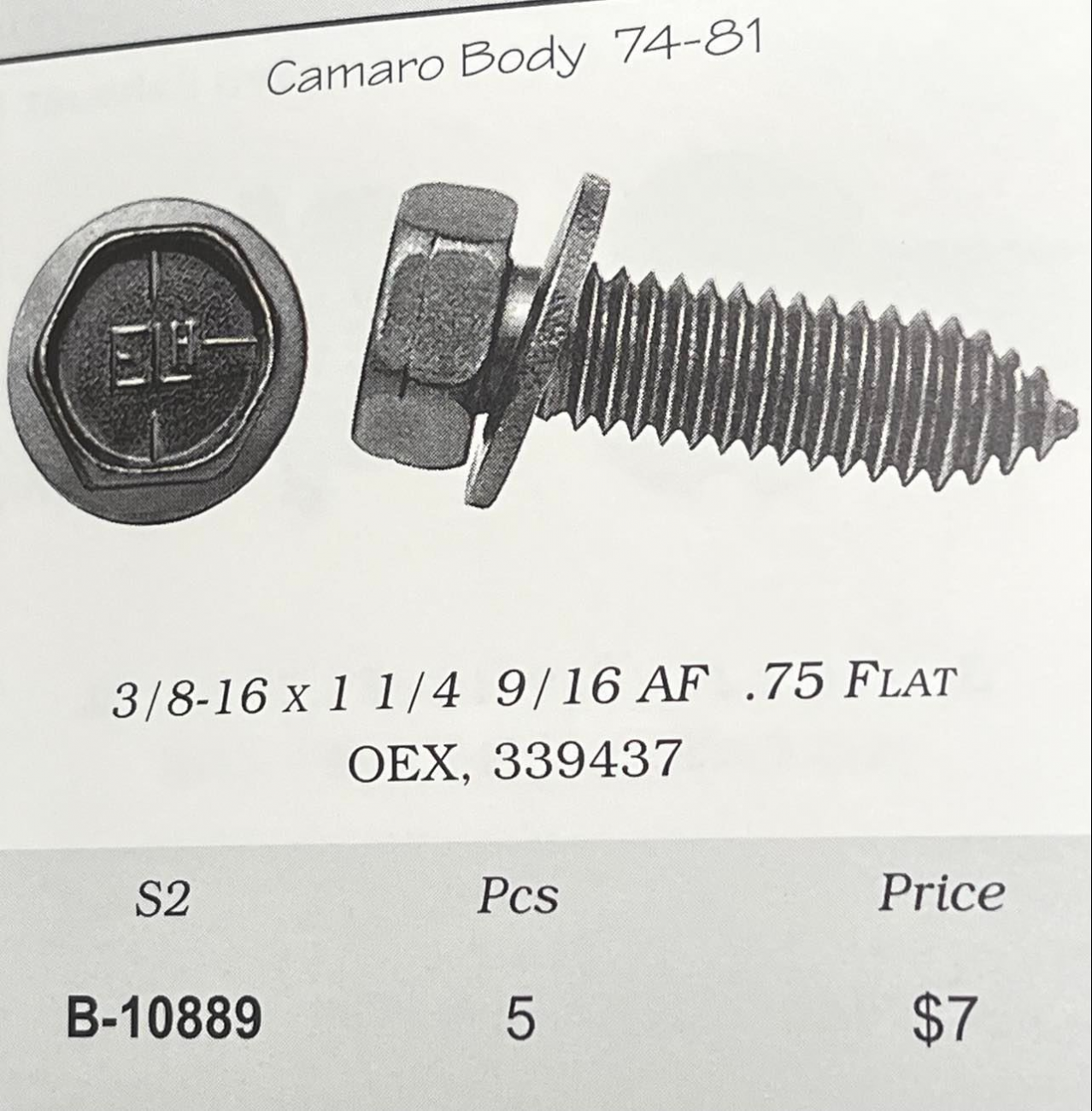 Can someone please confirm this is the right one?

A few of the photos showing the mod I had to make on the 75 Radiator Support to use it in the 77.

Those look like the right bolts. I wouldn’t fret too much about it unless you’re doing a concourse resto. Probably find a flange head bolt at the hardware store that will work fine.