I'm starting to wonder whether I have a standard rotation water pump rather than reverse rotation...

So with the 383, it had been running on the warm side... I'm running a 170 thermostat to keep the operating temp on average around 180-185. On a high load condition (like going up a hilll at moderate throttle) it'll bounce off 200 even on a cool day around 75F. With a 180 it runs a little hotter on average. So I don't think the thermostats are the issue.

Thinking the single row "Autozone style" radiator was no longer sufficient, I recently bought a Frostbite 3 row, with 11/16" tubes. Effectively doubling the tube/fin area of my old radiator. But the cooling performance is basically the same. I ran the engine at idle with the radiator cap off for a while to try to ensure no air in the system.

Then doing some reading online, I started thinkng maybe the large shroud on my Taurus fan unit may have been too much of a restriction at speed, so I got a LS1 dual fan setup. Still the same cooling performance. I got a smoking deal from LKQ, $70 to the door and they look really cool and are quieter than the Taurus fan when it's on high speed, so I'll keep them even if the problem is something else.

So I think I've probably eliminated airflow as the problem (my setup is probably pretty typical), which means it has to be coolant related.

My cylinder heads are the same AFR 180 heads I was running on my old ZZ4, running about 9.7:1 now. Again, nothing outrageous.

A few years ago I had bout a Stewart water pump, but I wonder if somehow it's not a reverse rotation and was getting away with it on the old ZZ4, but not the 383? Doesn't seem like there's a good way to tell what it is when it's on the car though... I bought the p/n 13123, which is the reverse rotation, but I wonder if maybe wrong pump got put in the box or something or the wrong impeller got put into the pump.

The Autometer temperature gauge on the dash agrees with the data aquistion system which is reporting on the ECM's coolant sensor, so I know it's also not a sensor issue. Both sensors are right next to eachother at the front of the intake manifold

Not sure what else to consider at this point. I'm tempted to just run over to Oreilly's and get a basic water pump for ~$45 and eliminate the water pump as the problem...

Any rate, hoping to get this resolved before the summer heat kicks in and I'm running the A/C.
Last edited: Jun 4, 2022

is yours serpentine? if so, does flat side of belt lay on a smooth wp pulley? ... while the serp crank pulley has several grooves?

If yes + yes, pull pump and pull rear cover off ... and post a good pic of impeller (ensure photo is Not reversed).

For clarity, correct configuration of impeller vane is Not to "cup" the coolant ... but to fling coolant from back side of vane.

not apples to apples, but I ran a a built race CT motor and did use a verified reverse rotation C4 era vette pump ... BUT I drove it in conventional pump-crank same rotation. So it did "cup" the coolant BUT No overheating or iffy-maybe. But again, race only.
U

Yeah, serpentine. The pulley is flat and the flat side of the belt runs on it. I know the belt routing is correct.

I'll probably pull it off tomorrow morning. Hopefully Stewart uses an impeller that you can actually see the vanes (like those stamped ones).

Also, when I put the radiator in, I ran the car with the cap off for about 10 min after it got up to temperature. The driveway has a pretty good incline to it, so it angles the front of the car higher (which is good for encouraging air to move toward the top of the system). So I'm pretty sure the system is bled well. But I've always been doing that way any rate...
Last edited: Jun 4, 2022

Pardon me for my poor recall. Correct me as needed.
Seems yours is a GM/Chev Performance crate 383 (4.005" x 3.8") on the L31 platform; Right ?
However, I don't recall exactly which heads yours has? ... iron GM vortec, aluminum GM fastburn ? etc etc?
What I'm getting at is ... How have you addressed the somewhat unique coolant bypass scheme the sbc vortec "880" block design presents? Lotsa ways to skin that cat ... but have you? and if so, how?
I don't know that's at issue here; but perhaps there's an improved cooling opportunity afoot.
U

Hmm, I didn't know about the Vortec coolant bypass thing. But reading around online it looks like that's only a factor with the Vortec heads as you seem to be alluding to as well.

Also, the HT383 short block has the coolant bypass hole in the block. I watched a video where they explain that on performance engines that use the Vortec block, GM goes ahead and drills that hole (whereas on production versions of the Vortec block, they don't). 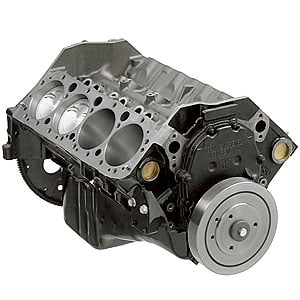 The vanes are oriented like the one on the right. It's a little hardto photograph...

The block also has the bypass hole drilled.

200* isn’t going to hurt anything.
It may actually be running more efficiently at that temp.

If fuel boils in the carb, you need to insulate the carb from the intake heat.

As long as the fan is kicking in when it’s supposed to and bringing the temp back down… I wouldn’t worry about 200* or even 220*.

A lower temp sensor for your fan is about all you can change to keep it cooler.
(Or… add a manual override switch on your high speed fan relay to engage it when you get nervous.)
U

Yeah I'm not worried about overheating per se. These temps are certainly benign.

I'm just curious why with a setup like I have that I can't get the engine to run at the thermostat temp.

Matter of fact my ultimate goal was to put a 195 tstat in there if was able to figure this out since I'd be confident it'd run right at that temp.

What I may do next is pull the manifold off and make sure the front coolant ports in the head aren't obstructed or something strange like that.
Last edited: Jun 5, 2022

The problem with running a lower temp thermostat is that it opens up a lot sooner and does not give the Radiator time to cool down the water. If you have a 170 in there and your running at 200 then it is always going to be open.

There for you water is just going in the radiator and right back out without any chance of cooling down. You need your thermostat to actually close for a bit to stop the flow and that allows the water that is inside your radiator to cool down better before it reenters your engine.

Brew61 said:
The problem with running a lower temp thermostat is that it opens up a lot sooner and does not give the Radiator time to cool down the water. If you have a 170 in there and your running at 200 then it is always going to be open.

There for you water is just going in the radiator and right back out without any chance of cooling down. You need your thermostat to actually close for a bit to stop the flow and that allows the water that is inside your radiator to cool
Click to expand...