Happy New Year to all of you! Enjoy it safely!

Hope everyone new year off to a good start.

Pretty good, went out to Nevada to visit the new grand-baby!
Happy 2020 all!

Thanks, nutchevy. FINALLY doing some melting around here,...that is a VERY positive thing!
Grandpa, huh? Hope you had a good trip, TFF.
Working on Fiat Spider re-upholstery, here,...
Happy 2020, all!

I got super lazy for the end of 2019. Despite having quite a few days off work for Christmas/New Years, I didn't get out to work on the Camaro at all. Relaxing felt real good, but I'm wishing I'd gotten SOMETHING done. Wasn't just lack of progress on the Camaro - I didn't get much of ANYTHING done.
Back at it for 2020 - supposed to be decent weather tomorrow. I hope it's at least looking like a car again by the end of this year!

Sure hope ya got heat in that garage, today,...or have your winter woolies on, Jerry! It's COLD. 'Been this way, up here, since Thanksgiving,...
It's good to occasionally do nothing, for a bit,...R&R.
Best of luck, workin' on the Z!
All have a good weekend! Todd.

Yeah, about that...
Let the dog out Saturday morning about 7:00, and it was COLD. Checked the weather report and saw it wasn't supposed to get much better.
So I stayed home and did pretty much nothing. Again.
Once it warms up, I'm going to hit it HARD. My company just bumped up Paid Time Off (vacation) days this year - getting a whole extra week of PTO now. Since I don't do actual vacations, I know where I'll be spending most of those days.

The weather will co-operate, eventually, Jerry. You'll be able to get back at it then. It's not been hospitable in my garage for a month and a half! But this next week looks better,...
I know how frustrating it can be,...I recall being at this point, and having a long way to go: 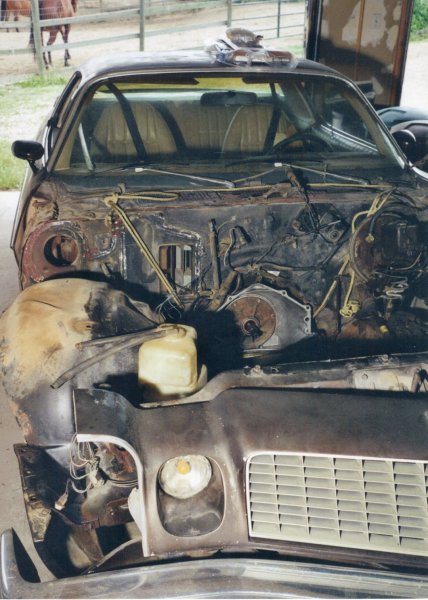 @Jerry73Z28
How long has it been since you started your resto? Don't feel guilty about letting the old girl sit for a bit while you enjoy a little r and r, or whatever you feel like doing even if it's restoring another car!
It's been a little over a year on mine, I kinda hit a plateau with fixing the rust, but this is my first resto so I insist on getting as close to perfection as I can! I hand formed my first patch panel, there won't be an ounce of bondo on my baby! There is a chip in the roof seam that I don't think is small enough to cover with extra layers of primer, so I guess I better learn how to melt lead!
This whole thing stems from me wanting to fix a slightly tweaked quarter panel from getting rear ended, I wanted to start immediately, that was 4 years ago this summer!
It will be so nice to have a camaro that was better than when she left the factory brand new! I got the L48 small block to replace her second inline six, her first swap was for the 155 hp L88 six from a 70 camaro that was getting LS swapped. I only bought it because it came with the Muncie m21 3 speed to replace the th350, but it's way better than her factory hecho en Mexico block with that awful integral head (95 hp) haha!
Anyway here are some pics you and your dad should like, I was reading an old issue of popular mechanics and they compared an automatic citation x-11 against a bunch of rwd man7al trans euro coupes. The citation handed them all their asses I love it! I would take that audi in a second, add her to the pile of cars I need to restore - 53 bel air, 77 g10 van, 78 g30 rv, 85 subaru xt and 86 subaru gl. Also an 86 monte carlo and 85 toyota 2wd truck that me and my bro are going to tandem restore. He has more resto projects than me, all bmws what a weirdo.
Lemme know if you want to read the text!
Cheers boys 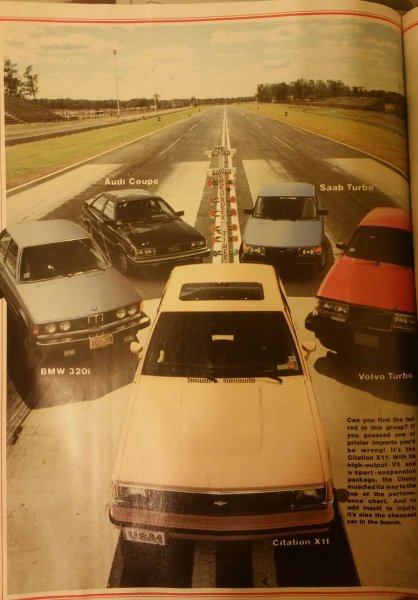 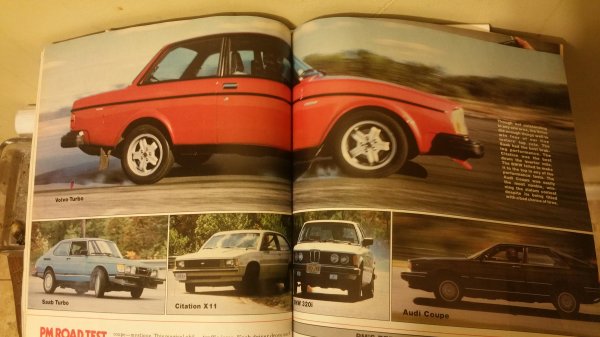 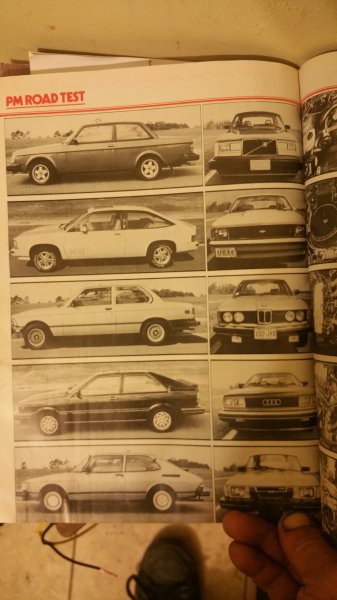 Good to see your post, sparkyboy! Wow, the Chevy Citation,...I had no idea. Thanks for the info. Used to love Popular Mechanics,...!
Bought my car 2000. Began 'restoration' 2001. The picture in my last post was from 2003. Daily driven 2005 - 2009. I finished it well enough to show in 2015. Long process, unless you have the money and time to do it all at once,...
Best of luck getting to those car projects, guys! Looks like the weather may begin to co-operate a little, soon,...
Happy MLK Day!
P.S. Yo, spark! Lead body repair (tin is used now) is actually pretty easy - I just did several fender repairs on the Superbeetle before I painted it, a year ago. Utility propane torch worked just fine,...have fun!
You must log in or register to reply here.
Share:
Facebook Twitter Reddit Pinterest Tumblr WhatsApp Email Share Link