What’s the latest opinion on the repop RS nose? The last summit review was 2016. Is it also possible to find a used nose or seeing how they are all 50 years old, they are all warped anyways?

Youre probably not going to find one that fits perfect.OE had constraints on all their pieces that had to be met either by them,or the supplier,or it was shot down.
That doesnt exist now.
The ones they sell are fine,you just have to bend,then sand and fill on them.Its not a bad job honestly,as long as you use the right stuff on them.
TBH,I would take a new repop over an old NOS one at this point.they were bonded raw metal,no primer on the frame and over time that joint rusts,and delams at certain points.
I did mine fast,so there was no blow by blow in my build thread,but I can list what I did(and what I didnt do,lol) if you like.

Sure, I did end up buying one last night. Seeing the prices, I bet some of these parts are going to continue to skyrocket 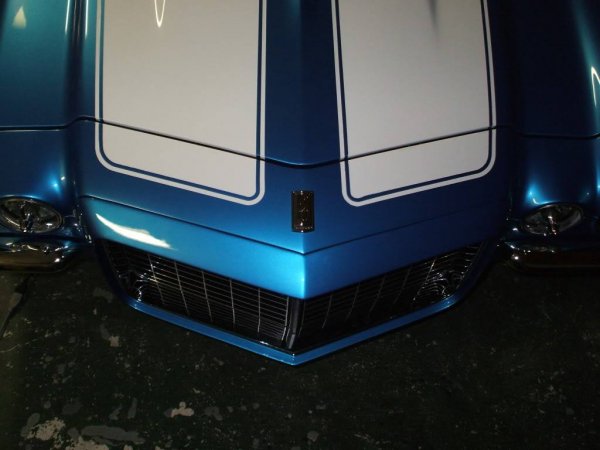 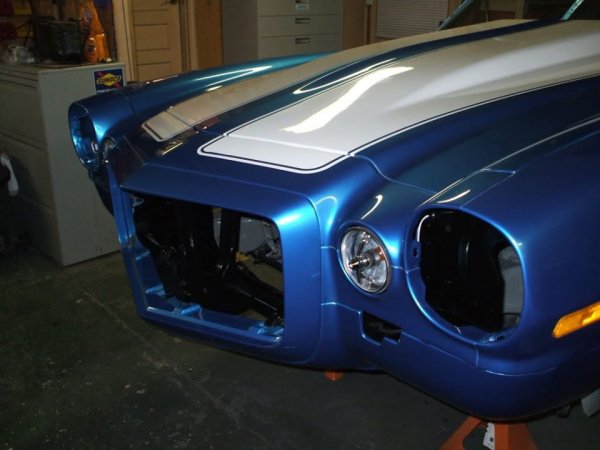 Ok,so first I bent it to match the metal,it was slightly out.
Then I made an hour glass shaped 2x4 cut to the exact length of the spreader bar as a handle and mounted it in the nose.
Also mounted the surround and grill to make sure all that fit well,and it did before proceeding.Then I removed the grill and surround.
Then I just held it up.and filled with the two part urethane epoxy repair using masking tape and gravity as the "dam" to hold the liquid until it set up.
I used Evercoats stuff because you dont need a special caulk gun for it,and its cheaper than 3Ms.
I used the "turtle" shaped sanding block they sell in the stores(walmart,advanced auto)and 120 grit.
Just soap and water on those noses wnen working them,never any solvents,or even denatured alcohol,just water.
Took about 2 hours of sanding and filling,mostly building up the outer corners to where I like them.I shouldve built up the bottom angle on mine,where it meets the metal,but I called it quits and good enough,it was a time thing,car was already in paint.
Ive seen others let their nose go in this area too,lol,but its on the bottom so,however far you want to go with it.
Evercoat used to have 3 types of epoxy repair,I think they were a thickness thing.I chose the one that was more liquid,than stiffer,but Im not sure which ones they offer today.They give you (used too)2 nozzles where the mixing occurs as you squeeze,but when theyre gone,you can continue to use it as its just a 50/50 mix,so you can work smaller longer,rather than squirting out a whole bunch and wasting it.
I just continually held the nose on the metal,sanded,noted where I needed more,and continued til I was happy.
For something almost everyone shy's away from,it was one of the easiest things I ever did on the car.
Last edited: Jan 21, 2022

Is your surround and grilles OE or repop?
D

IMHO, the repop parts are junk. I bought a RS clip kit and could only use a couple parts. When I tried to assemble, almost none of the parts would line up. And, IMHO, repop fenders are junk too.
I found a fellow in Wisconsin that had an RS front clip. Bought it and within 1.5 hours, I had the entire clip, excluding the hood, bolted on and lined up.
That's just my experience. Good Luck

badazz81z28 said:
Is your surround and grilles OE or repop?
Click to expand...

All repop.I have an OE RS grill and its an exact copy.
Of course the repop chrome isnt what used to come on our cars,but its nice enough.

DrPepper said:
IMHO, the repop parts are junk. I bought a RS clip kit and could only use a couple parts. When I tried to assemble, almost none of the parts would line up. And, IMHO, repop fenders are junk too.
I found a fellow in Wisconsin that had an RS front clip. Bought it and within 1.5 hours, I had the entire clip, excluding the hood, bolted on and lined up.
That's just my experience. Good Luck
Click to expand...

Absolutely! I will NOT use repop sheetmetal. I will stay full bumper if I can’t find it. I’m pretty set on everything else OEM. I don’t have the chrome surround or grills…these are harder to find without paying an arm and a leg

Ahhh the 1st onset of compromise finally sets in on the Badazz man lol. Careful starting down the path of the dark side my friend! Warned you I have...Mmmm.

Just kidding. I agree with Chris, if I went RS I would rather have the newer OEM nose piece because of the 50 year old one being prone to delaminating. As far as fenders go you need to know how to elongate holes in the brackets or cut them off and relocate to the proper position to make them fit good. Of course if you have deep pockets and don't mind paying 1500 each for NOS fenders then go for it. If I needed one fender I'd consi that. But if you need both quarters and fenders that adds up pretty quick. If I had a 396BB matching numbers then yeah I'd empty the wallet for those. But for a base coupe of tribute car not so much.
You must log in or register to reply here.
Share:
Facebook Twitter Reddit Pinterest Tumblr WhatsApp Email Share Link