To hard to tell if it's original or reproduction, need close up pics. That POP looks pretty shinny in the photo.

70lt1z28 said:
Saw a nice 1970 Z28 last weekend at a local show. I have seen it for the last few years and talked to the owner then who was the original owner. This year his daughter was driving it and I come to learn that he passed away in May.
Anyway, I was looking over the original window sticker and noticed that there was a specific entry for the electric clock. I thought this odd as the Z28's came with the U14 gauges standard which had the clock.
The car also had the Z21 Style Trim Group which had the extra exterior chrome like the RS but it isn't listed on the WS. There was a large photo from February of 1970 as part of the display and it has this chrome so it doesn't seem to be a later addition.
Everything else including the VIN was spot on, even the rare VF3 bumpers.
Did the window stickers change through the year?
Click to expand...

Is there any way to pay, get my window sticker. Have my build sheet I found in my front drivers seat.

Reproduction window stickers are readily available. A number of companies will print one up for you using the information you have on the car. I don't know how accurate they would be as the information needed to get it exactly right may not be available.
Your build sheet is more valuable as it is original.

Dean70Z28 said:
Is there any way to pay, get my window sticker. Have my build sheet I found in my front drivers seat.

I was originally questioning if the info that was placed on the window sticker was a bit "fluid" over time. A case in point is this car being so early. When it was originally ordered, there were no cars to compare it to and the dealers, especially in small dealerships and markets, may not even have had the most up-to-date info. The 1970's were just being introduced and the dealers hadn't even seen them yet. The original owner wanted to make sure he got a clock, so he checked that box even though the Z28 gauge package came with one anyway. Maybe that's how it appeared on the window sticker? As far as the Z21 package not being on the WS, not sure on that. The car was restored once and maybe that was added.
R

This from the 1970 Chevrolet Passenger Car prices that that the dealer used...You can draw from your own conclusion, maybe it was just oversight by the salesman. 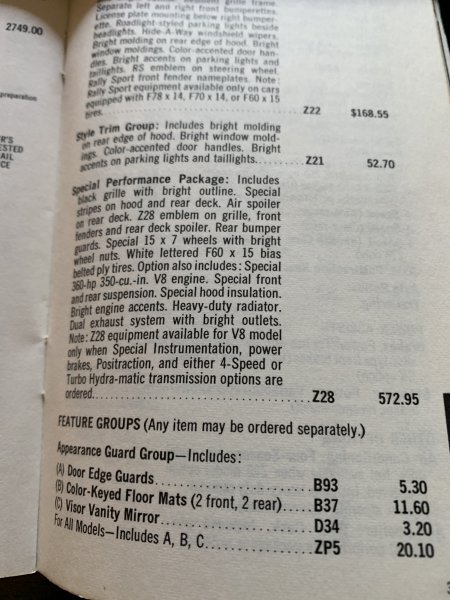 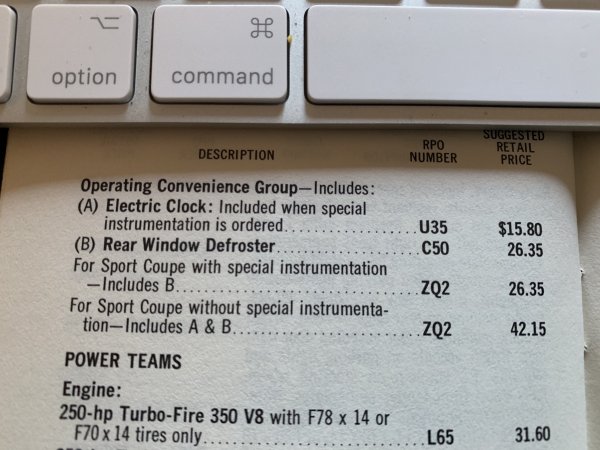 From the list of build VINs I have, that car wasn't a really early built car. It would have been made in the second full month of production, Mid-February. The production practices were solidly in place by that time.

The presence of an extra cost clock on the sheet to me screams reproduction sheet. As shown above, the clock was listed as extra cost on passenger cars. Nothing it noted there about Camaros where we know that the clock was not available separately, only as part of the special instrumentation package. The people doing reproduction sheets don't know all the details of every car so they often make mistakes like this. If you look at the build sheet of any Camaro of that era with special instrumentation, the U35 clock shows up on the build sheet. That alone would fool most reproducers of sheets so they would mistakenly put it on the window sticker as an extra cost item.

This is the problem with reproduction documentation. Once they make their first mistake, there is no credibility of anything else on the paper.
Even if a salesman made the mistake of ordering the clock separately, the factory would not make the same mistake on the documentation that originally came with the car.

I don't have a window sticker for my car because none came with it. However, a little known fact is that when the window sticker was printed, there was a second sheet behind it that was also printed at the same time. This one got the same imprint as the original front sheet, but was a white sheet of paper with "CAR SHIPPER" printed in it. It would be easy to reprint the information from my car's Shipper's copy to a blank window sticker, but in doing so, I might end up throwing all my original documentation into question if even one little glitch showed up on the reproduction. It isn't worth doing as I already have enough original paperwork and since I have owned the car since new, I know it all to be original.

Makes sense to me. I didn’t think about the clock not being available as a stand alone option.

Sure would be nice to be able to order a new Camaro today just the way you wanted it. Leave out all the froofraw garbage that just kills the fun of owning a Camaro. If I wanted a Caddy I'd, well, keep on wanting with my income.
G

Those days of ordering the car you want are gone. That is a "50 years ago thing". Today you are expected to drive one of their clones and not complain.