Every summer I have issues with fuel vaporizing in the lines under the car. I have traced it to the rear of the car. The lines run inside the frame from the tank forward to in front of the rear end, then move to the outside of the frame rail. Unfortunately the after market exhaust parallels the fuel lines. A temporary line was run outside the frame, plus various shields and insulation were installed with no relief. The exhaust heat combined with the radiant heat from the road causes the oxygenated fuel to vaporize. With 110 octane race gas there is no problem so the pump gas is part of the problem.
Installing an after market electric fuel pump help reduce the problem...that was until we had this recent heat wave of temps over 108°. The other factor was the noise from the electric pump.
The ultimate solution is to have a pump in the tank with a return line. Because of the small opening of the tank for the sender it is not just a drop and go conversion. Of course no one makes a tank with a pump in it for our model of car, only thing to do was improvise.
A new line was added to the stock sender to attach a standard Delphi/GM pump. The existing line was used as the return. Getting it all in the tank was a challenge. The pump when attached would not allow for the insertion of the float and sending unit, the work around was to install them separately. First the pump with the hose attached was lowered into the tank, then the sending unit. Next the the sending unit was pulled straight up as was the pump, the hose slid onto the pipe and the clamp tightened. Then the unit was dropped in and the lock ring installed. The length of the new pipe, the hose, the pump and the strainer were adjusted to be just slightly longer than the depth of the tank so when installed there is a little pressure on the strainer to hold the pump in place. The pump and strainer are for an 82 Corvette and is rated at 14 psi, just right for a carbureted engine. A return style regulator was installed to complete the system.
Even with temperatures 110° +there are no more fuel issues and no more loud fuel pump.
While this works great I could not help trying to improve on the set up. I had a 79 Malibu gas tank with the larger opening and a spare tank from a 75 so why not try a little cut and paste

I removed the ring out of the spare 75 tank and enlarged the opening. The ring and stamped area of the tank from the 79 Malibu tank were cut out as a single piece.

Next the small lock ring on the 75 tank had to be removed. The spot welds were drilled out, the lock ring removed and then the hole in the tank enlarged to the size of the bottom of the stamping.

After trimming the excess metal from the 79 parts they were test fitted to the tank to determine where and how it could be mounted. The step in the stamping for the O ring fits into the hole in the tank and the raised area on both pieces will make a perfect place to make the connection. The black line on the parts is where they will be connected. 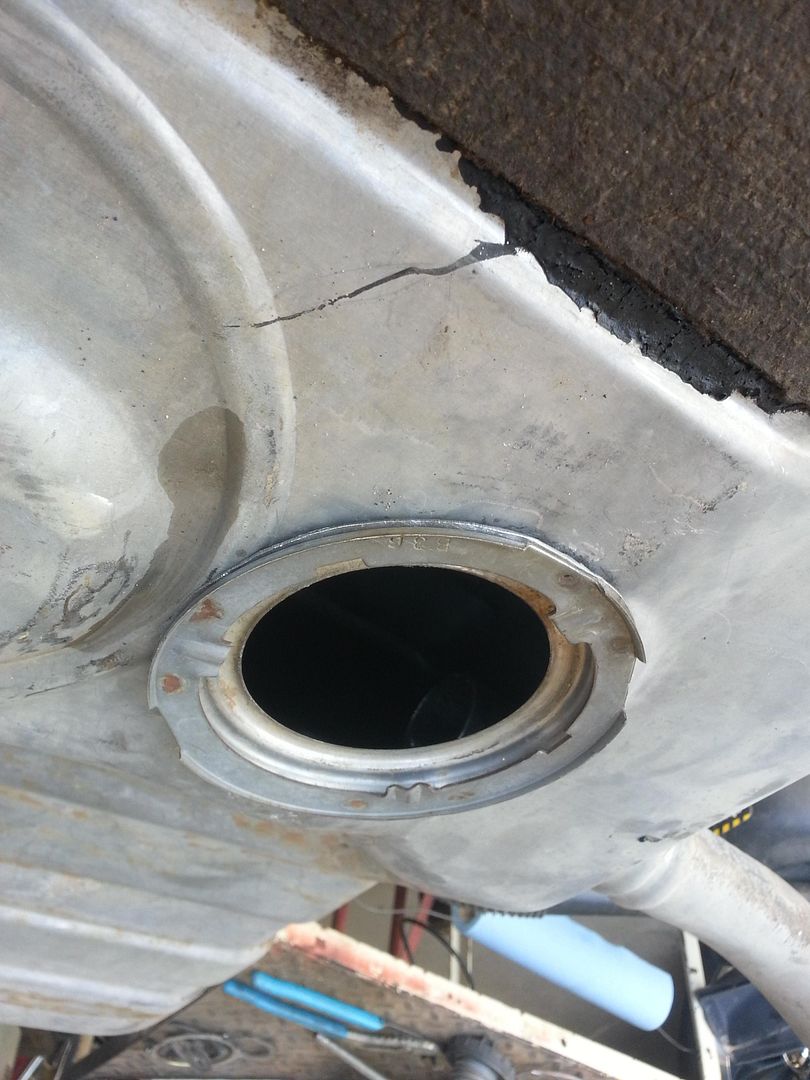 This is with the Malibu sender in place, but a later model unit will be needed.

After a little research I discovered that the sending unit from a 90 Caprice with a 5.7L should be the correct depth and have the correct size lines. After getting one the install can be finished and tested. Before permanently attaching sending unit the ring assembly I'll need the Caprice unit to orient the pipes correctly.
For a fuel injection set up a small reservoir sump will be needed at the bottom of the tank to keep the pump in fuel. The hole is large enough to be able to reach in and attach one.
Still not sure why Spectra does not offer this as an upgrade. They make tanks for FI conversions for most vehicles and they make a stock replacement tank. Could not be that much of a tooling change to add the larger hole and ring.