Saw this on lunch break they are saying it was a firecracker warehouse!!!

That's a huge explosion and damaging shock wave , looks like a Munitions explosion . Reading the comments some say and speculate it was a Amonium nitrate fuel explosion
Last edited: Aug 4, 2020
4

They are saying it’s a fireworks explosion ??? Lol. B freaking S
1

They are saying it’s a fireworks explosion ??? Lol. B freaking S
Click to expand...

Not enough white smoke for "fireworks", in my humble opinion.

That appeared to be a "detonation".
(Chemists know the difference, the media commonly misuses the terminology.)

It looked to be bigger than a terrorist "truck bomb".
It's very possible it was an industrial accident and not a deliberate bombing.

Either way.... That was a VERY destructive blast, preceded by what looked like a chemical fire.

They "lost contact" with the firefighters on the scene. 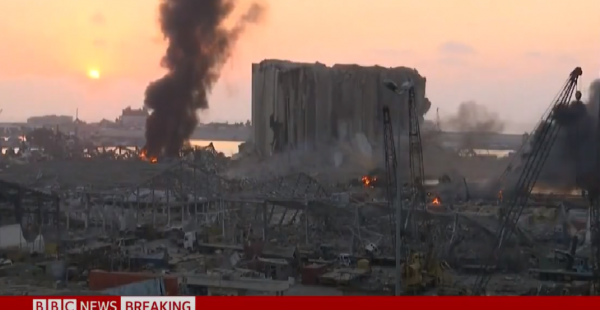 No portion may be used with or without permission

It may have started with firecrackers, but that there 'splosion was the real deal. If it was ammonium nitrate, that was no accident.
S

Someone posted on twitter that it shattered their windows 10 km away.

biker said:
It may have started with firecrackers, but that there 'splosion was the real deal. If it was ammonium nitrate, that was no accident.
Click to expand...