you probably could talk to a financial advisor. They have access to products us regular folks can't just order on line and can make better interest vs savings accts. jim
M

When it comes to selling your precious metals do not sell to a dealer. That is for people who need fast money. When you sell your metal you become the dealer. I've sold bullion on ebay and FB marketplace at dealer prices and I'm just some joe dirt dude. It goes quick on there too. You wont' have any trouble finding demand for your metal on ebay or FB. That is unless you buy some bs bullion that cost way more than the gold value because it has some crazy awesome design to it. If you buy a bunch of stuff like that then you'll be hard pressed to ever to break even.
Last edited: Dec 2, 2022

There is no right or wrong answer here. It's relative to your level of tolerance and the time you have to invest.

In the 90's I had a girlfriend who got $150,000 settlement, she did everything right, took a modest amount and bought a nice used car and set the rest with an investment group. Ill advisedly, she allowed the investment group to make a bunch of risky trades and the money was gone within a few years.

Personally, by the year 2000 with 12 years of me stuffing money in my 401K along with an 8% company match and periodic several thousand dollars in bonus money my company put in, my 401K plan an all time high and I was elated, however, shortly thereafter came the 2000-2002 meltdown and my balance dropped by 62%... a 62% loss. I was completely caught off guard and devastated at the loss and mentally tainted with the stock market. It took the next 6-7 years to recover back to that value, but it eventually went back up and even though I am extremely cautious now, it's appreciated quite nicely over the past 20 years. Had I not been so cautious after the 62% loss, my money would have tripled or quadrupled by now.

Gold may be an asset, but as others pointed out you are at the mercy of the market, as well as sellers and buyers. Assuming history will continue to repeat, a well allocated 401K plan should do just fine in the long run. If you are fearing a recession in 2023, consider shifting some of the Roth funds to something less volatile and wait it out. However, as anyone will tell you, there is no way to time the market and I am a perfect example. Every time I thought a crash was coming, it didn't and when I was convinced the market was good and put my money back in, it generally tanked shortly thereafter, but overall, I'm in a good spot after 35 years of investing.

Financial advisors can be great as well. My current girlfriend is using Edward Jones, and although it's been a rough 2 years for her, overall they have not done too bad.

Back in the 1980s, when I got out of college and started working for a living, I read an article that historically going back to the 1920s the US stock market has returned on average ~10%. Not sure if that's still true, but I've always tried to put some money into the market - GM's old stock savings program in the 1970s(my dad insisted, even though I was still in GM's coop program), IRAs and 401Ks since the 1980s. But of course youth was in my favor back then; which is not the case now. The market has had it's setbacks - there was the 1987 "black friday" thing, the tech meltdown in the late '90s, the 9/11 attacks, the 2009 financial crash. But the market came back from those fairly quickly. Of course as they used to say, past performance is no guarantee of future returns.

Lately, my best 'growth' has been in real estate. We have two duplex units plus a condo and an empty lot that we will be building a duplex on. The duplexes we paid cash for 10 and 12 years ago, one a short sale and the other buying from the bank. We paid cash for both, being lucky we had the cash available and the appraised value is now more than double what we paid for them. The condo we have owned for just under a year so hasn't appreciated much but it is generating income.
T

danbrennan said:
going back to the 1920s the US stock market has returned on average ~10%. Not sure if that's still true,
Click to expand...

It's been better than 10% since 2009, on average, but I think that ship is about to sail for a while. i feel like we *might* be headed for a repeat of the 70s with a decade of stagflation. I'm not a pro, so what the hell do I know really, but there's a lot of turmoil out there.

Here's a snapshot of something I started years ago (maybe 2010 or so when we were all still freaked out by 2008 crash) over a discussion we had here that included Stacey (Aceshigh). In his book "Beating the Street" (I think), famous Wall St. money manager Peter Lynch declared a "rule of 5%" for retirement withdrawals if left in the market in perpetuity. The premise is simple- take your retirement, buy "the market" (which is REALLY easy to do these days- you could simply go all-in on SPY (S&P500 Depository Receipts, an ETF)), withdraw 5% for your yearly living, and then inflate your withdrawal each year by the CPI. At any point in modern history from 1926 to present, it works, regardless of starting year or inflation. He tested it using the worst years he could find at the time- retiring 1/1/1973. It still worked.

I made a modification a few years ago to something that seemed more realistic- set the initial account at $500k (seems achievable for typical middle class earner), withdraw 7% for the first 5 years, 6% for the next 5, then 5% forever after that until it runs out or you die. I figured maybe more traveling/activities in the early years, so front-load you're spending a little bit.
I added a "control group" of buying CDs using the average 12-month CD rate for the year. Smarter folks would probably "ladder" their CDs, but that made the math too hard, and over the long term, probably wouldn't affect the balance drastically.
I assumed start of retirement in 2005 at age 62, figuring that this person would take SSI also (but SSI is not included in any of the chart). Here it is- 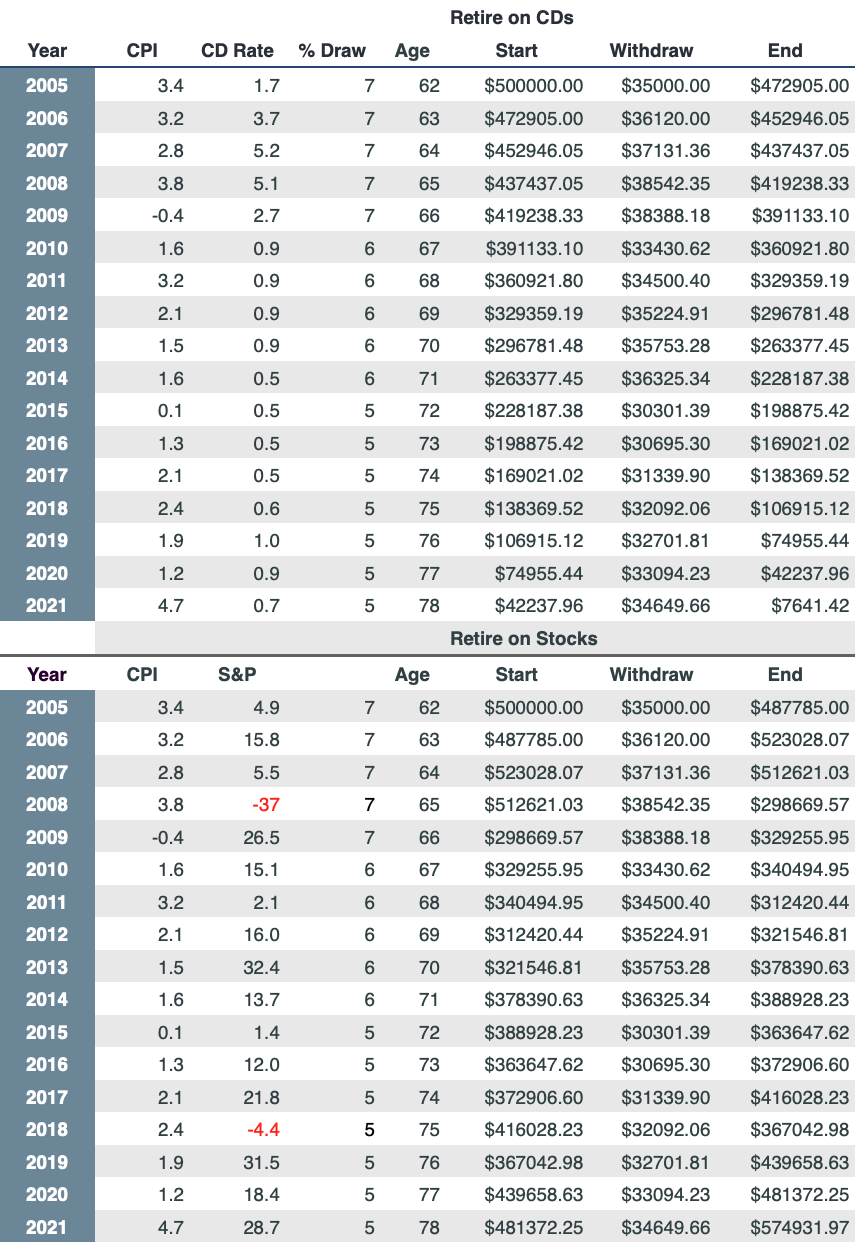 As mentioned, past performance is no guarantee of future results, and frankly, I don't expect to see results from 2009-2021 again for a long time, if ever. It requires stupid monetary policy that's brought us to where we are, IMO (and I ain't talking about COVID cash, yo). Nonetheless, the SPY strategy should still work for a 25-30 year retirement, even at a 6% average stock market return. 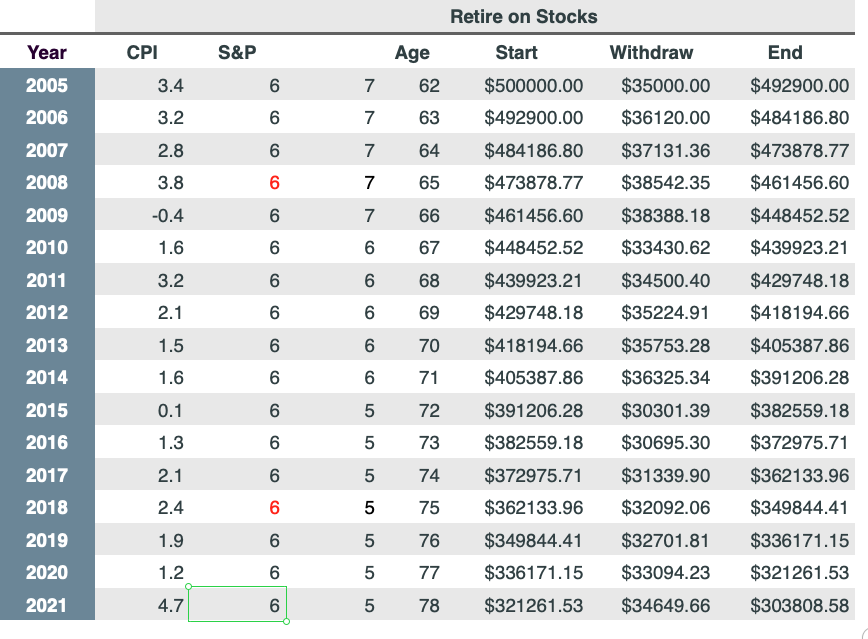 Todd80Z28 said:
It's been better than 10% since 2009, on average, but I think that ship is about to sail for a while. i feel like we *might* be headed for a repeat of the 70s with a decade of stagflation. I'm not a pro, so what the hell do I know really, but there's a lot of turmoil out there.
Click to expand...

I've been thinking that, too, although I keep in mind the notion that history rhymes more than it repeats. I agree about 2009-2021 probably being an aberration, and the endless QE after the 2009 crash enabling it. Also, I think the increase in importation of cheap Chinese goods significantly helped keep inflation down(and I think the growth in that is winding down).

On the other hand, the US debt as a percentage of GDP is much higher now, than it was in the '70s. I'm not sure I see how the Fed can keep interest rates high, with the current US debt, without the interest payments cutting into not only military spending, but things like social security and medicare\medicaid(which will be loudly protested). The Fed may be limited in how much rates can be raised, and we may just have to live with higher inflation.

The other thing that seems to me has been overlooked about the turnaround of the early '80s is the increase in productivity. There were a number of deregulation initiatives started, to his credit, by the Carter administration, and then extended by the Reagan administration. But currently, all the moves seem to be towards more regulation.

In other words, if inflation is caused by too much money chasing too few goods(as Austrian economists like Milton Friedman claimed), then there are two ways to reduce inflation - restricting money supply and increasing productivity. I'm not an expert either - although I rather enjoy pretending to be one on the internet

So I imagine all these things will act to reduce company profits, and thus apply downward pressure to stock prices. Still, people did make money on individual stocks in the '70s. It wasn't all doom and gloom.

But it's all just guesses, really ..

Good post about retiring on CDs versus stocks. I keep fighting the urge to put my investments into safe things like CDs. But then I look at data like you posted, and figure if I live into my '80s, I'll outlive my money.

^^^^Not if you spend it wisely. The problem with ALL financial analysis is it is only history. There are extremely smart, highly paid, professionals who can't predict the future of anything financial. History is just that, history. ANY investment is a crap shoot. The only difference between them is the odds. You know the old saying, "gamblers don't gamble".

but you learn from history.

IMO at retirement you have 2 years need in cash/cash equivalents. and much of the remaining portfolio in solid dividend performers (not chasing yield over quality, looking at you AT&T). i used to think getting heavier in bonds as I age, and one of my roth IRAs is all bonds. not sure i'm on that train as much anymore.
Last edited: Dec 3, 2022
You must log in or register to reply here.
Share:
Facebook Twitter Reddit Pinterest Tumblr WhatsApp Email Share Link