I have an (08D) 1974 Z28. "Forth" week of August. Never thought much of it until I started looking at more threads of when production parts were changed. i.e. HEI, Borg Warner 4 Speed, the right front inside fender slot etc. I started looking at the build dates of the cars presented. I have yet to see any Z28 produced as late as mine. That got me thinking, when WAS the last Z28 built? Is there a 2nd Gen registry? A 1974 Z28 registry?

Would love to know where mine falls in the lineup. 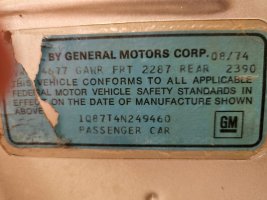 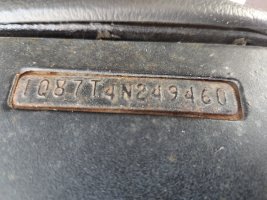 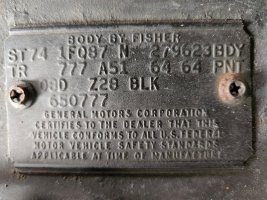 Yours is certainly a late build. Monthly production figures on the '74 Camaro don't appear to be posted anywhere after the end of April '74 for whatever reason. Zfool who has a late build '74 (not as late as yours) may have some more information on this, however.

Mine is 04B however, my Canadian documents show a production date of Monday, April 15, 1974 so I don't know how the "cut off" dates for the particular weeks work. I've also heard that the '74 model year ran until early September of '74 but I don't know of any monthly production numbers after the end of April to back that up.
K

Well...little did I know that Z28Pilot owns that car. I should have recognized his avatar. What a great resource he has been as well as everyone else on here.
I am going to post all my date codes from the original engine hopefully this week.

Keep in mind on average they built about 1 Z28 per hour of production. When they announced it was the end of the Z-28 orders went up. That would compress those numbers towards the tail of production. Getting decent numbers are hard to come by but with cross multiplication and some other statistical modeling we can assume they were probably producing 1.5-2 z28’s per hour at the end. The tags are indicators not always a Bible verse. There were hypothetically 7,078 built between yours and the one I’m working on, in one week. The factory claimed they made 9-10,000 a month. Keep in mind lots of things just don’t add up with vins and tags. But I’m sure there was a massive push to finish. I’ve talked to 2 others who claimed to have had CZ open elements from 73 installed new. One who had the air box in the trunk that needed to be modified to fit the HEI. I’ve restored one air box that had adhesive from the original sticker #6488412 and the next layer of paint had adhesive from the sticker before. There was two layers. So they pulled them back and modified re-identified and repainted them. One AC Delco employee said the production and supply of parts for the new ignitions and spark plugs was rushed for Cadillac and Chevrolet. The late build cars are special and you’ve got a gem. If it was a HEI LT Z BW 4spd on the D week I would make an annual pilgrimage to worship it. Because it probably would be the last of those made. You’re def one of the last. If you get bored and lose interest in it let me know before you blow it apart lol. Cool find.

I don't understand the VIN sequence? Can someone shed some light?
This is the 74 VIN and I don't see a 2 in the first digit? The info below is from this site.

McCune said:
I don't understand the VIN sequence? Can someone shed some light?
This is the 74 VIN and I don't see a 2 in the first digit? The info below is from this site.

The 200K numbers started in June. They built till September and have no records of the monthly numbers. The info was lost I believe.

Thanks. I was wondering what the heck.
K

Some of the date codes / numbers... 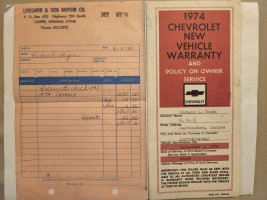 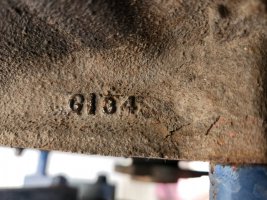 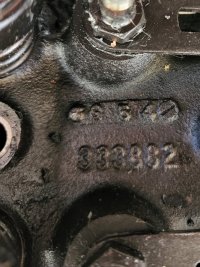 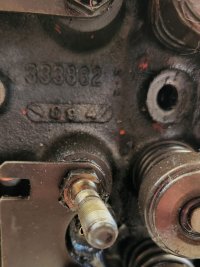 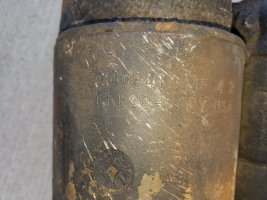 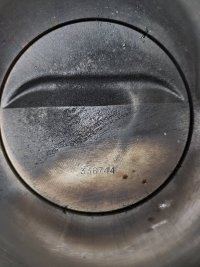 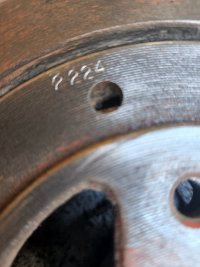 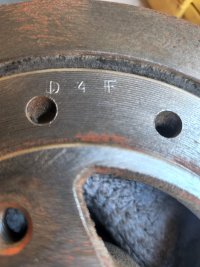 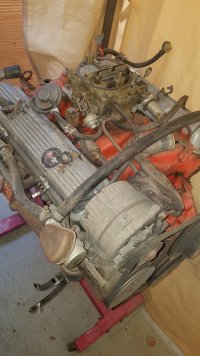 You still have those little wire holders that clip to your valve cover fins. Practically irreplaceable. Don’t ever lose those.
E

Gentlemen: I'm the original owner of a 74 Z28 LT, 3.42 rear end, Burgundy Red with Saddle interior. I originally ordered about January 1974 or early Spring without AC but a union strike for months only allowed orders with AC units.
Fortunately I relented late Spring and mine was delivered to Commonwealth Chevrolet in Boston in early June or July.
Although the first "pollution" controls were coming in and the engine is only 9 to 1 compression. it has been a fantastic car. The L82 engine only has a variance of 3 lbs. on the compression to this day and I've never had the heads off!
Advanced the timing, changed springs in carb, Hurst Competition Plus shifter.
It was ordered almost fully loaded with a sticker of about $6100 and I paid about $5200. I guess I got a good value!
Why do I still have it? It's as much fun to drive today as when I first bought it!
You must log in or register to reply here.
Share:
Facebook Twitter Reddit Pinterest Tumblr WhatsApp Email Share Link