Trying to complete a late ‘72 model standard seat belt set.
Need a pair of front seat retractors/ front seat set of belts. Black is great, but not opposed to other colors, as most likely will reweb.
The front retractors on these have a blow molded flexible shell & the male end has an oblong keyhole shaped slot. Tag on front male belt will read Irvin 2212. Thanks in advance for cking your parts stashes! 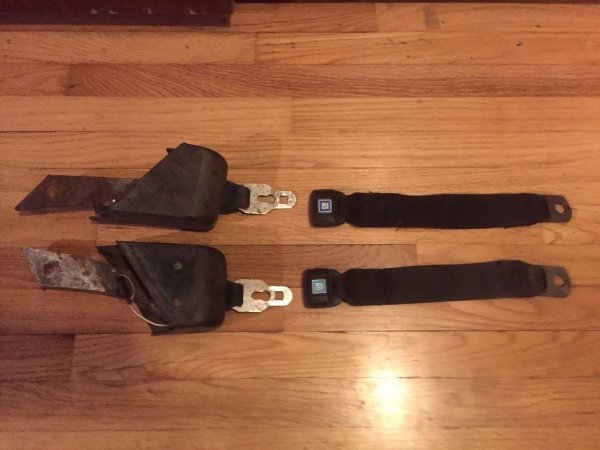 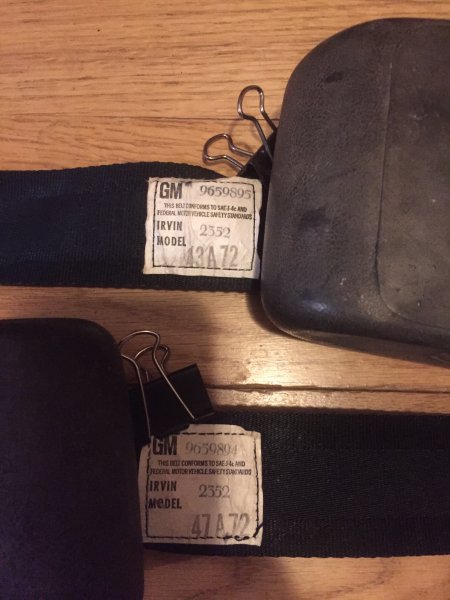 I have these in my stash.Do they look like what your looking for?
SOLD
Last edited: Mar 20, 2022
O

Very nice for a fellow member to offer these. Pretty dame hard to find items.
But that why this site is awesome.
O

Am still looking for a late ‘72 model year drivers side F-body seatbelt retractor assembly. These have a thin molded flexible plastic shell. Shorter in height than ‘73 & ‘74 F-body front retractors.

Also need a pair of rear seat belt retractors for the same (one of mine, the thin plastic shell is in poor shape).

Would be open to a complete set of late ‘72 F-body seatbelts if it takes that.

Often times, on the late ‘72 Irvin’s, it’s the female buckles that have issues, frozen up, & also have occlusions in the lucite covered large GM logo button. These are not the molded plastic pebble grain buckles used in “exploding buckle” ’73 & ‘74 model seat belts.

I had an awful time finding a rear seat retractor for my late 72. Actually never did find one after looking at many swap meets, ebay, Carlisle, message boards,etc. A member finally found a buckle, give it to me. Had it sewn on a 73 (I believe) retractor which in back seat is hidden anyway. Hopefully you have better luck than I did. Jim
O

Thanks, will have to agree, they’re not the easiest to find, but am near complete on this 72‘s set, & a partial set or pieces will show up. Too many guys are bolting in the Morris belt sets or race certified belts & pulling out what remains of their original sets.

Prob my biggest regret on this restoration is not hitting eBay buy it now on an NOS pair of black NOS front seat belt retractors about 2 1/2 years ago. They were very expensive, seller was out of Detroit area & had managed to get into a major cache of NOS GM & Ford usage 60’s/70’s seatbelts. Since that time frame, bought a killer condition black set out of a Ventura, mainly for buckles & male ends. Also a few bits & pieces of late 72 F-body belts while boneyarding. Last Fall, a fairly complete set of late ‘72 F-body belts was also listed on eBay, but the thin molded plastic cover on the drivers side front retractor was all tore up, the rest of the belts, I had better, so passed. Have been asking questions concerning whether I could have the thin blow molded plastic covers reproduced through 3D printing, that would solve the problem with the covers.
O

Am a buyer on Late ‘72 model F-body Irvin belts.
Have quite a few nice extra male ends & buckles, don’t be shy posting if you have intact retractors with frozen up buckles & rusty male ends.
Z