Back on the car today. Installing the sun visors I purchased a few years back. First thing you have to do with these is poke a hole in the vinyl where the support bracket goes, I used an awl to punch the hole. 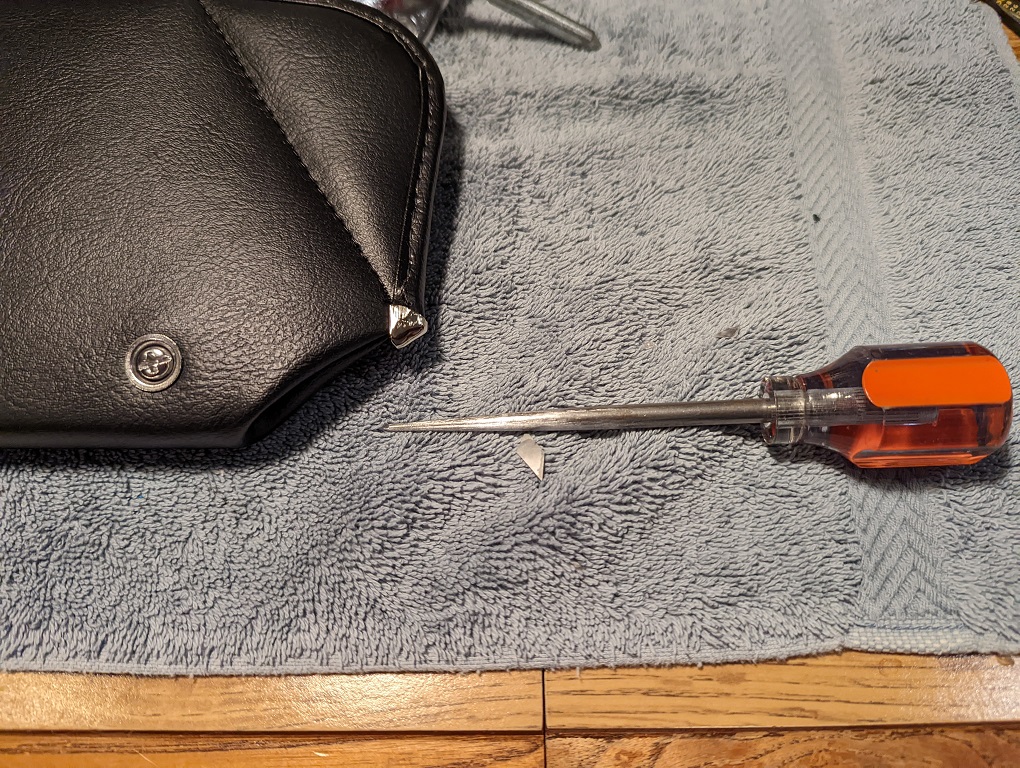 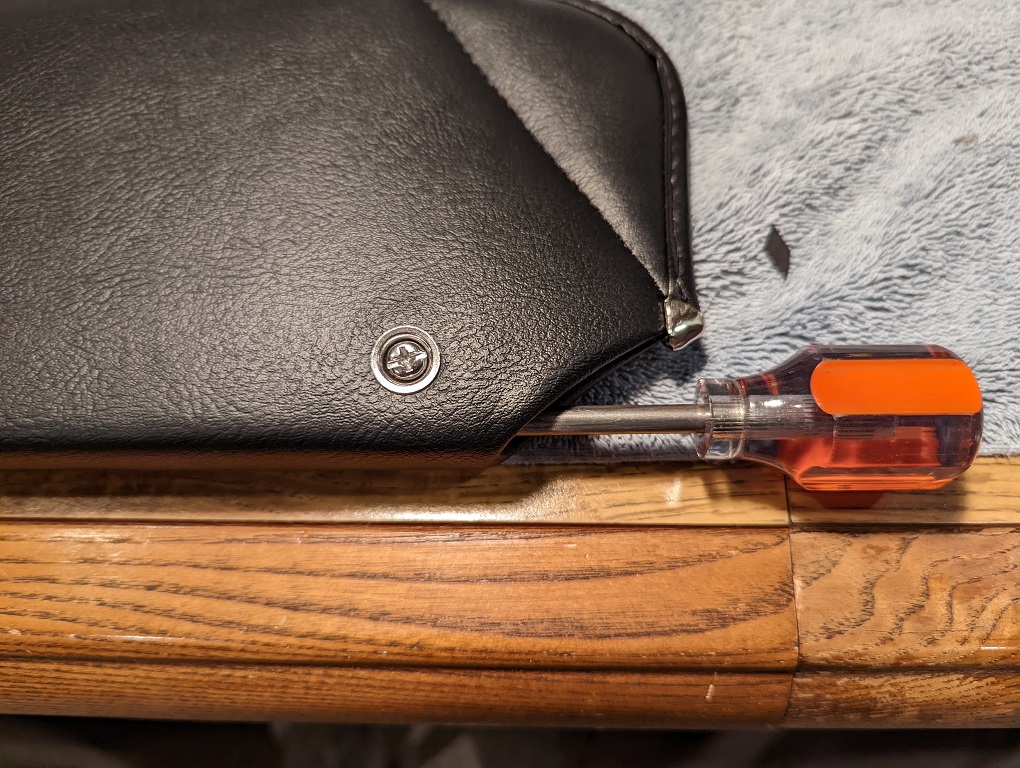 Now for the hard part, getting the bracket to go into the visor is tough, really tough. I loosened the set screw but still had to fight with the bracket to get it in. It took about 1/2 an hour to get the bracket all the way in. 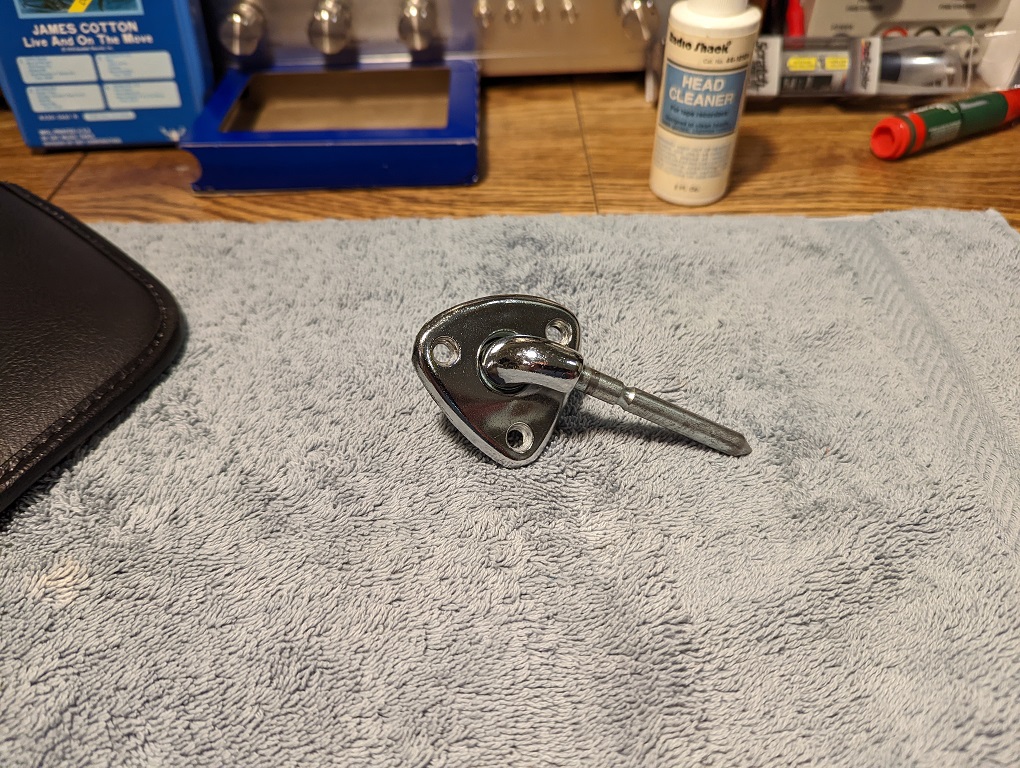 Here they are installed. I am a bit disappointed that they are not a bit tighter, even though I have cranked down on the set screws pretty good. Hopefully I didn't screw this up anyone install new ones, were they tighter? 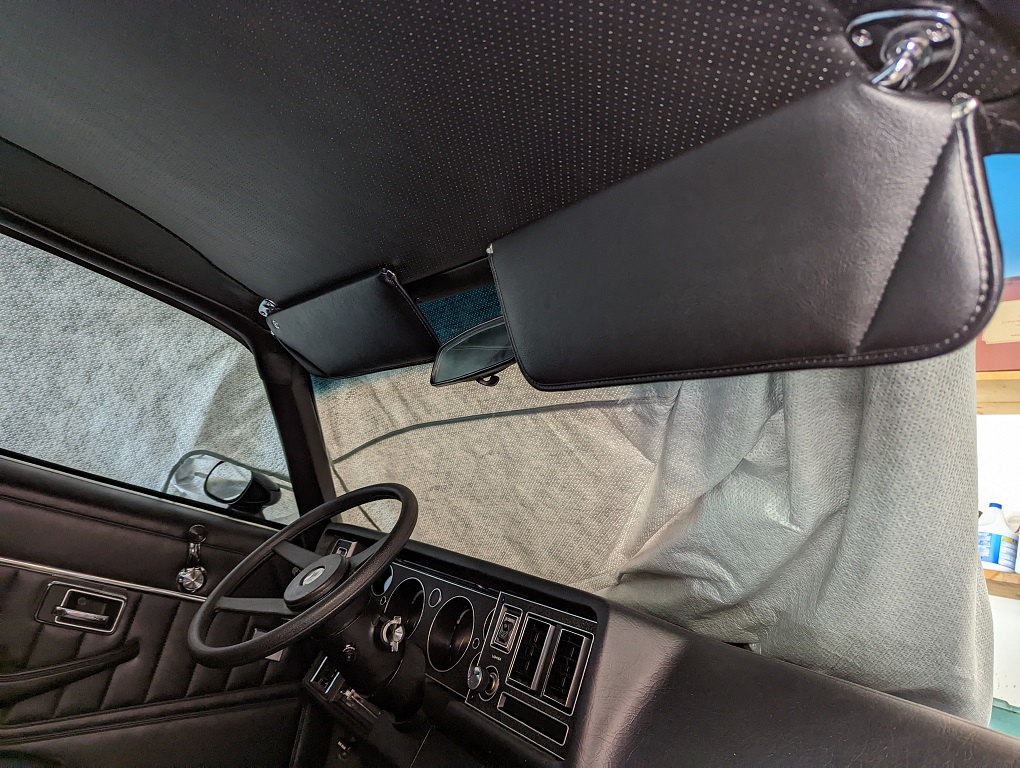 For the first time since I brought the car home in 2004, I will drive it. Today I got my car insured, registered and tagged.
I have no idea what to expect. My biggest concern is the transmission, will it shift out of first gear? Will it fail? I rebuilt it many years ago and have only driven in my driveway going 2 MPH. All of the suspension is torqued except the rear shackle bolts. I plan on driving around my neighborhood going over lots of speed bumps, slowly. I am staying close to home until I get some confidence that I wont get stranded. Probably wont go much faster than 30MPH.

I'll report back tomorrow how it goes.

Well, I put off the initial drive for a couple of days because Morris (classic seatbelts) called and told me that my seat belt is fixed at no charge. They sent it out Monday and I got it Wednesday. I wanted to wait since it is the driver's seat belt and I didn't want to drive without it. Installed it Thursday with no problems. So, a big thumbs up to Morris Classic Seat Belts for fixing my belt even though it was out of warranty.

I am drinking a cold one now because the initial drive went pretty well. I drove the car for about 20 minutes around the neighborhood going over about 20 speed bumps. Car ran well, the transmission (TH350C) actually shifted very smoothly. Was able to get the car up to about 30 MPH for short distances. Not sure if it ever shifted into 3rd. I hit the brakes pretty hard a few times and they felt good. I plan on doing this a few more times so I can get a bit of confidence that she won't strand me when I take her out of the neighborhood.

Question for suspension experts. I have not tightened the leaf spring shackle bolts. Should I drive it more before final tightening or is good to go after this short drive.

I think you're ready to flip the ratchet switch to "Righty-Tighty" and torque them down.

Worked on the car today. I first painted my rusty rear drums with some Rustoleum high temp paint. I also think that the brakes are dragging too much so I took a look at the adjusters and realized that when I put all new hardware on the adjusters were too tight. I had to back them off all of the way to get the drums to spin easily with just a bit of drag. I guess maybe with new shoes this may be the way to go. I also adjust the parking brake so that with 2 ratchet clicks of the emergency brake pedal the tires are very hard to turn. I hope that the next time I drive the car the drums wont get so hot now that there is a lot less drag. Here is one of the newly painted drums, I don't expect it to look good for long. Next item to address was my rear windshield. First time I ran water over it I noticed a small leak. And I just had it installed a few months ago. Turns out the fix was easy using this stuff. 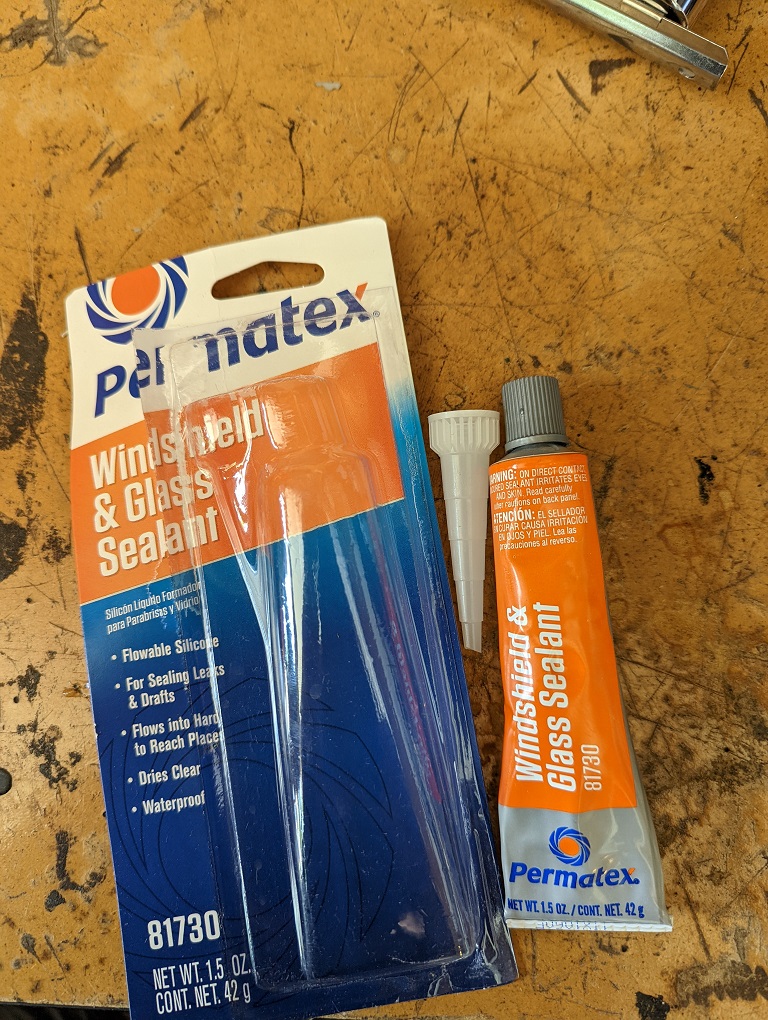 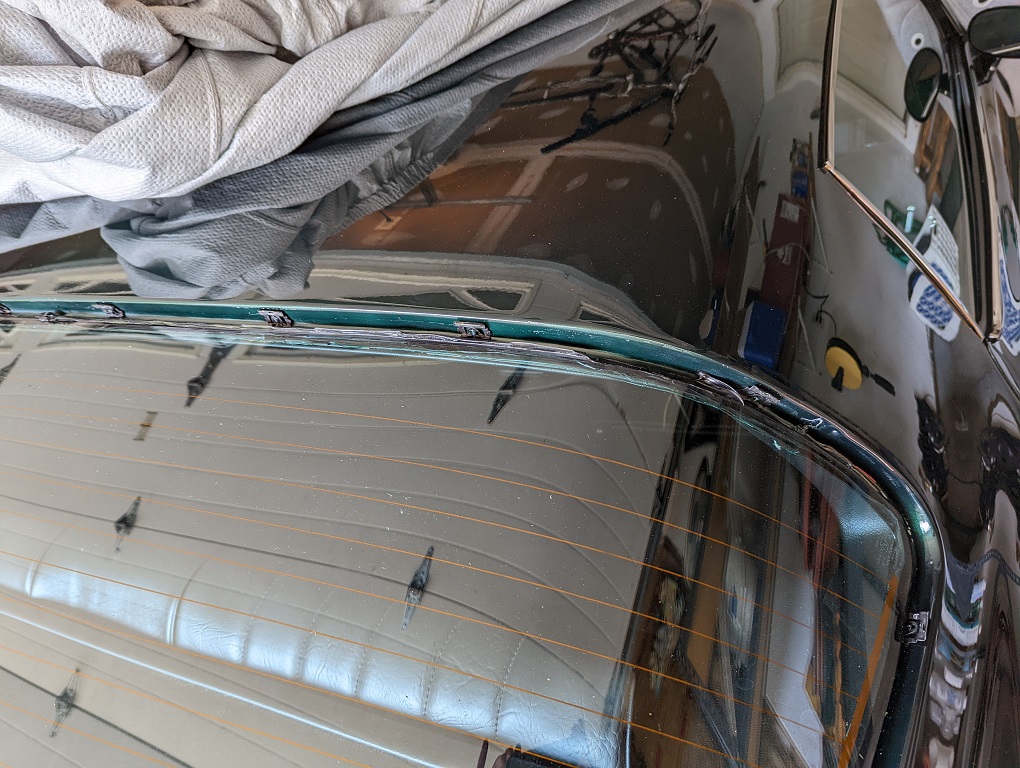 I let it dry for 24 hours and tested, no leak anymore. Just pop the trim back on 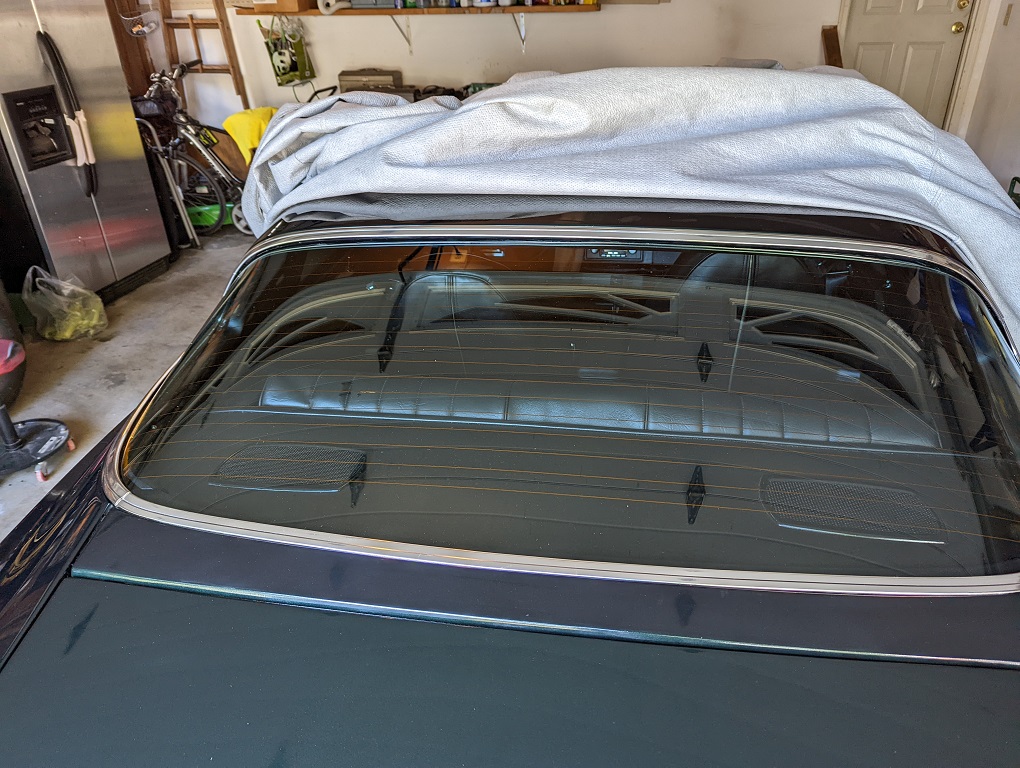 One of the last items I wanted to do on my car was address the rear wheel wells. The 40 year old undercoating was still holding up well but needed a recoat. First thing I did was clean the heck out of it with simple green and some aggressive scrubbing. Man there was lot of dirt in there. After that I let it dry for 24 hours and started by taping around the quarter 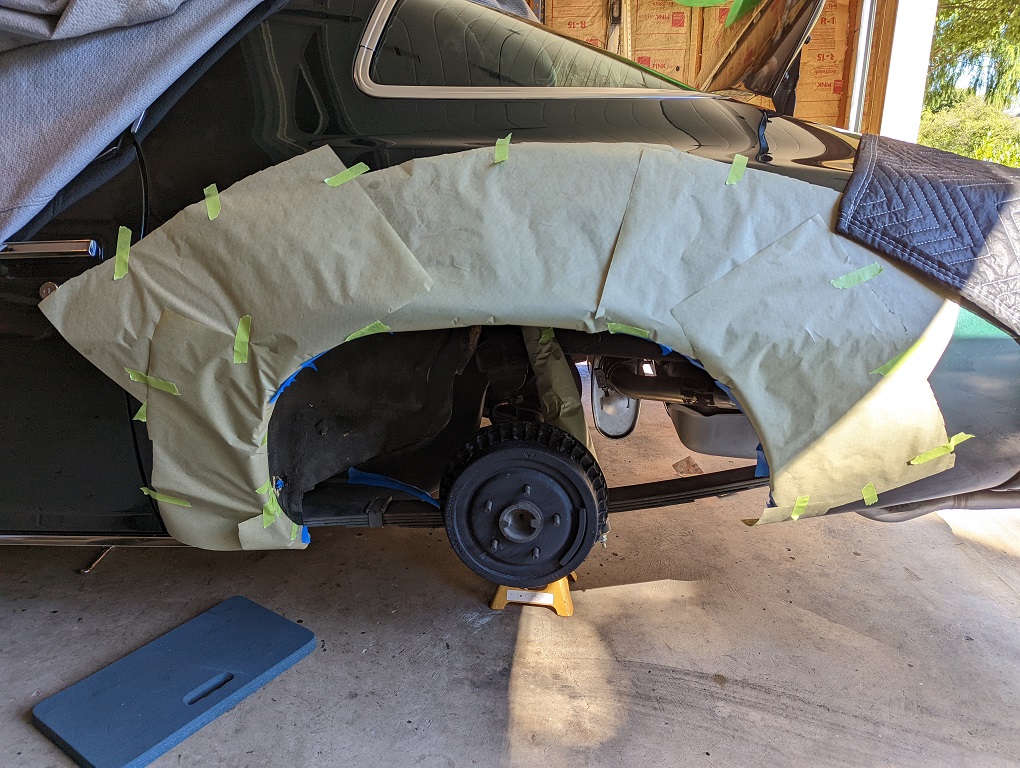 I used this stuff, you can get it at most auto parts stores Before applying the undercoating, I had this 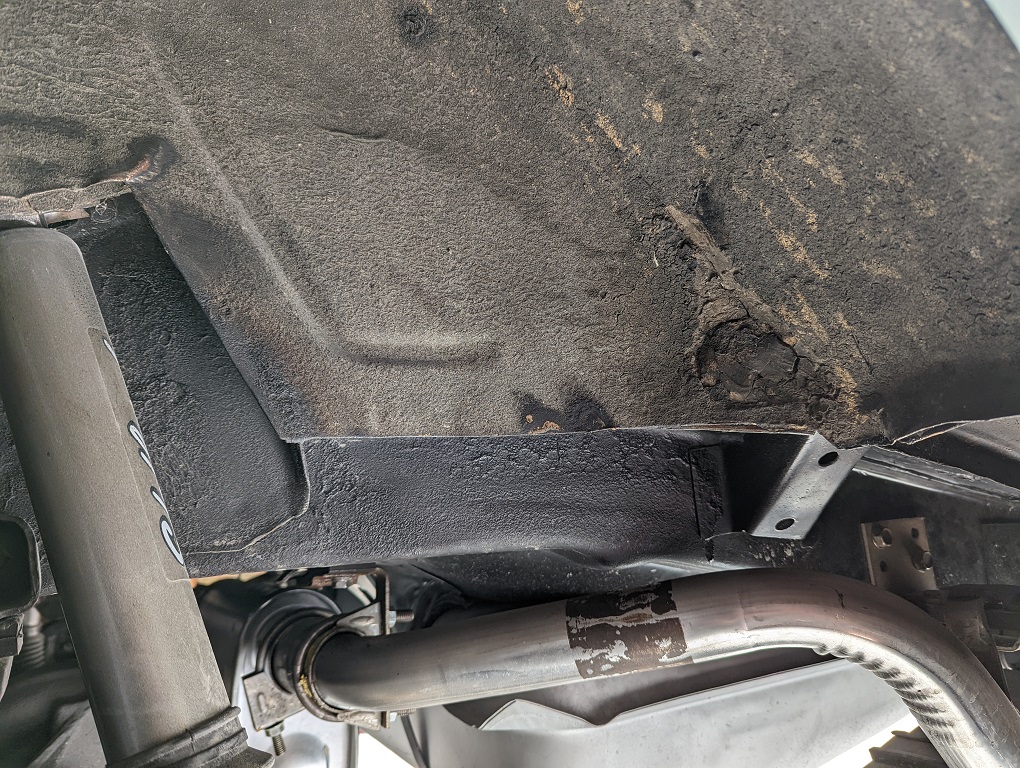 After spraying the undercoating Now I feel better about the rear wheel well. But I still have to do the other side.

Thats all for today
R

I love this attention to detail! Great job

Are those Edelbrock IAS shocks?

Those things are almost vintage items now.
(The Edelbrock suspension product line was bought out by QA1 about a decade ago.)

I think they are the same ones I have on my car. Good Shocks... You'll like them.

Those things are almost vintage items now.
(The Edelbrock suspension product line was bought out by QA1 about a decade ago.)

I think they are the same ones I have on my car. Good Shocks... You'll like them.
Click to expand...

Good Eye Twisted! Yes Edelbrocks. I bet that I bought them around 2006, very likely on your recommendation. They have been sitting on my un-driven (until a couple of weeks ago) car for at least 15 years. Hope they are still functional
Last edited: Sep 2, 2022

Back on the car today. One thing that was bothering me was the intermediate exhaust pipe that connects the cat converter to the muffler. It is the original pipe and is in good solid shape but was rusting pretty bad. I thought it would be a good idea to coat it with some of that high heat paint.

Started cleaning by running coarse steel wool over the pipe and then blowing everything off with the air compressor. This is what I ended up with 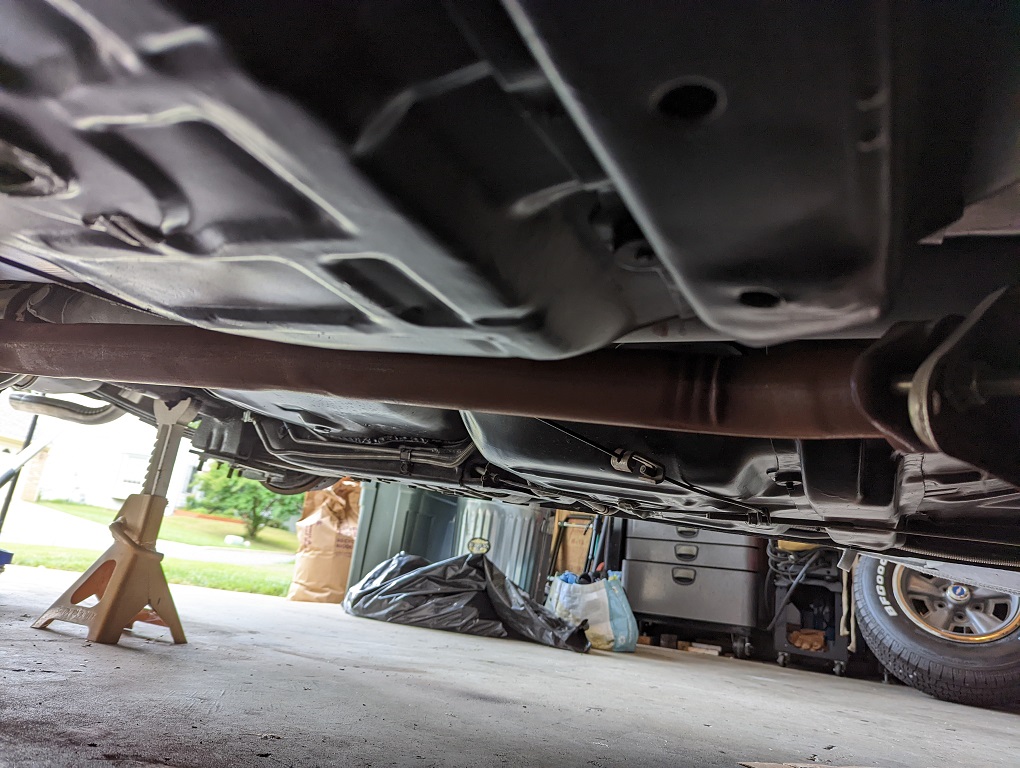 I bought an 8 oz. can of this stuff And brushed it on. I have to apply a 2nd coat after 24 hours.