I managed to zoom the picture in more and I think you may have won the prize on the '69 Roadrunner guess.

The car Terry posted looks like a Peugeot judging by the ornament.

MrAzzhat2U said:
The car Terry posted looks like a Peugeot judging by the ornament.
Click to expand...

Frank!!!
Good to see you visit!
Hope you're doing well.

It IS a Peugeot.

mallard said:
I managed to zoom the picture in more and I think you may have won the prize on the '69 Roadrunner guess.
Click to expand...

I'm sure of those two. 69 road runner has a rectangular side marker, 68 had round, and 70 was completely different. Hood gave it away for me. The 55, well I've had a few tri-five's and you get to know them pretty easily. I said Marlin because of the fish. They were aluminum. I would guess the convertible is a 64 Fury? Just a guess...

That's the most heard phrase around this car as people walk by it.
The Chitty Chitty Bang Bang car was much larger than this one but it shares some basic shape elements.

A little more history on the Peugeot.

It was built in Paris just prior to WWI, when France was still a "Right-Hand Drive" country.
(France became a Left-Hand Drive country in 1921.)

The chassis and engine were supplied by Peugeot, while the hand-fabricated, aluminum body was constructed by a coach builder and modeled after a Rolls Royce Alpine Eagle.

That's the way rich folk had cars built prior to mass production auto factories.
Aluminum was an expensive metal at the time and not commonly used for these horseless carriages. 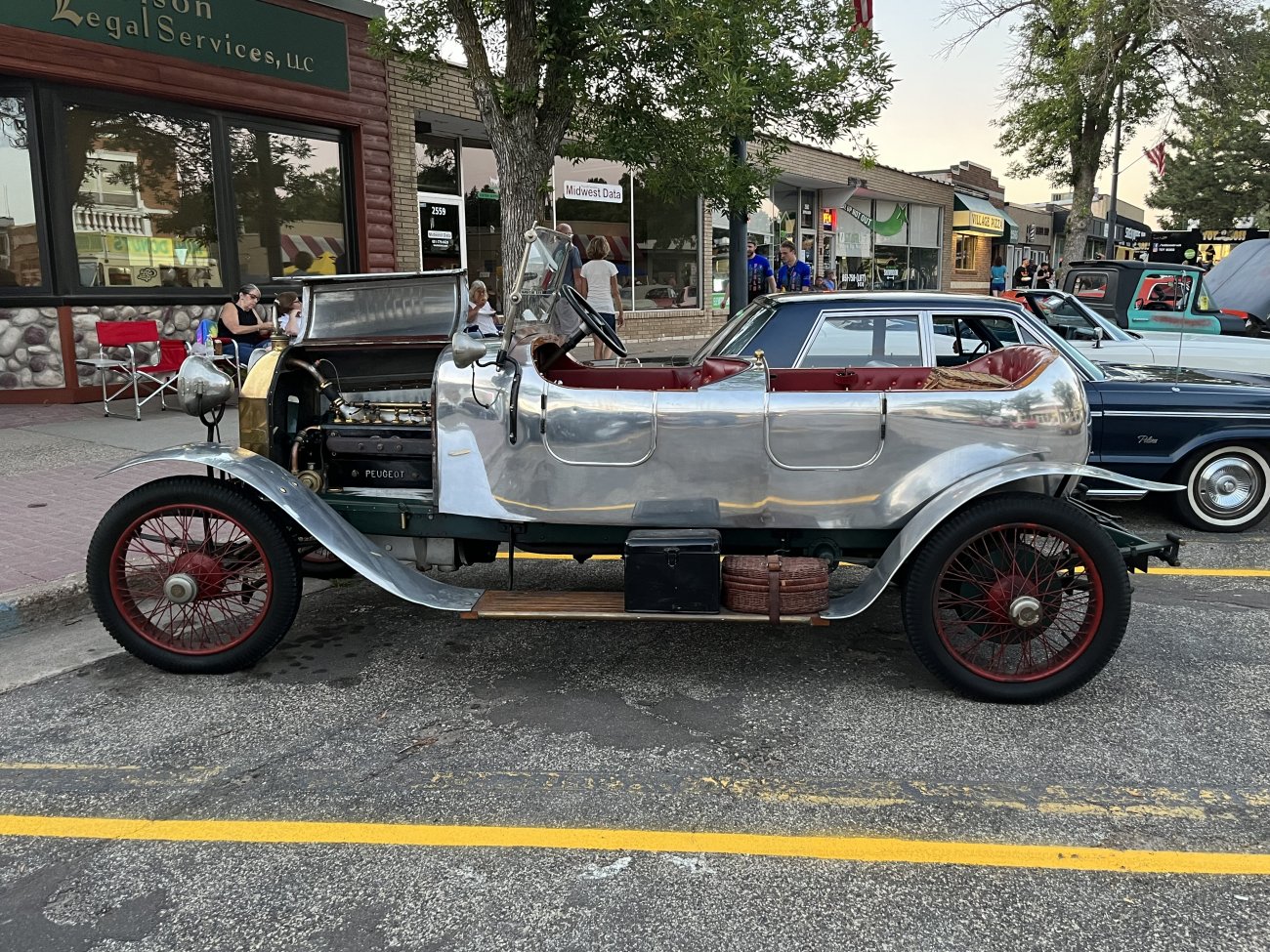 It has a four cylinder 2.5 liter engine which was rated around 30 HP and backed by a 4 speed. 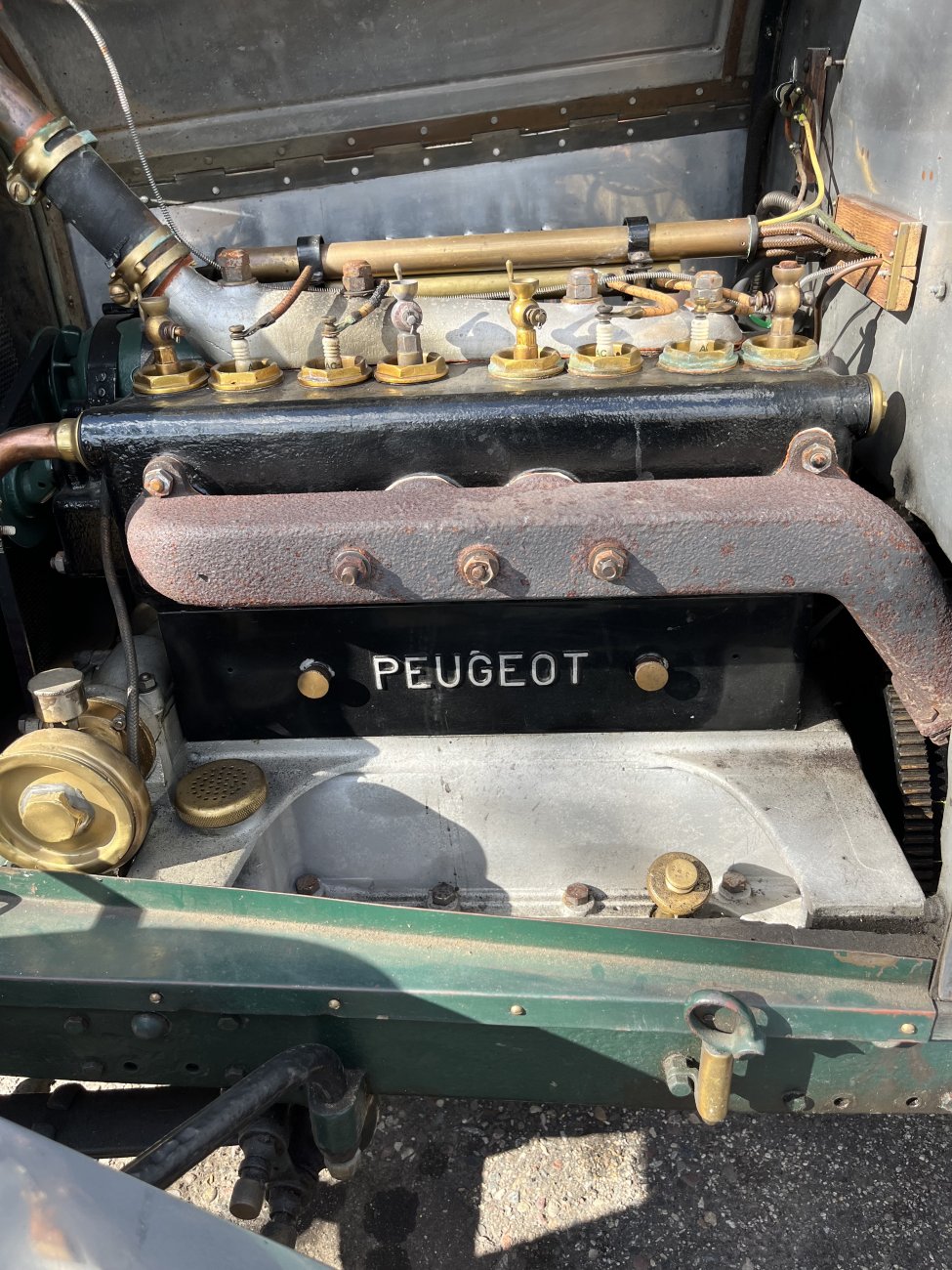 It was restored in the 60s and required a new wooden frame.

I asked him about tires for such a unique car (34x4) and found out he's a personal friend of "Corky"... The former president of Coker tire.

That Peugeot is a very cool little car!

Terry,
A friend of mine has a 1911 V2Y2 Peugeot that belongEd to his grandfather who was some big deal in the French Army.

They moved to the States after the First World War and had the car shipped here. I think he said it took about six months for it to get here (probably shipped by USPS) lol!

After he passed away the car sat in a barn for over 40 years and the wooden frame was rotted away. He found an old shipwright to make a new frame and he started to restore the car.Took about 15 years to finish it.

On a side note,the aluminum body had to be hammered out in one piece as there wasn’t any way to weld aluminum at that time. Whatever had to be attached was riveted together.

PS. Doing well and enjoying life at the beach.Hope all is well with you and the boys!
Tell Cal I still have the grass skirt! lol

I knew there had to be some inside knowledge on that guess because Peugeot’s emblem was always been a lion.
(Long before Peugeot became an automotive company.)

I have no idea why a fish was used for the radiator ornament.

That clue was somewhat of a red herring.