Pusher fan along with mechanical fan?

Anybody run an electric pusher fan along with a direct drive mechanical fan?

It’s like 105 here and I thought I’d rig up something to keep idle temps in check.
1

450bench said:
Anybody run an electric pusher fan along with a direct drive mechanical fan?

It’s like 105 here and I thought I’d rig up something to keep idle temps in check.
Click to expand...

Yes, we have one 16" pusher on the front of our 63 Biscayne and it seems to help at low speeds.
4

Good deal. I’m gonna do that then. Just need a little help in traffic.

My 85 Corvette had a pusher and a big single puller fan from factory. It was a manual transmission car too.

In my Nova I had 2 dodge 4 cylinder pusher fans and many different mechanical pullers trying to cool a .060" over 350.
I pulled the 3 core radiator from my 77 delta 88 and stuck it into the Nova as it was about 3" wider and was "rebuilt" and the Nova radiator was old.

The thing still ran hot. I tried No thermostat and washers in place of thermostat.
Distilled water and water water wetter.
That rebuilt radiator began to leak after a couple weeks and I decided to buy a NEW radiator.
Another copper brass 3 core as this was in the 1990's.

I sold the car10 years later and they friend who bought it called and said the temp gauge was not working.

I asked him if he was putting around town at slow speed listening to the exhaust.
He said yes for about 30 minutes and the temp gauge has not moved off the 130 mark.

I had drilled 4 holes in that 160 thermostat.

He called me back and said the temp gauge needle swung to 160 and stayed there.
Had to get some heat into it.

I tend to build my engines a little loose .0035" piston to wall with cast pistons.
Long skirt USA made 345NP pistons NOT hypereutectic.

You can try a different coolant mix for the summertime.
I do that.
180 and 195 thermostats begin to open at those temps.

160 are usually all the way open at 160.
I cook all my thermostats in a pan of water while checking temp.

Drill holes around the outer washer of the thermostat also.
Make sure your fan blades are not all the way inside the shroud.
Some or the blade needs to be outside of the shroud. You know that
That is if you have a shroud.

Didn't know that about fans. I always thought having part of the blade out of the shroud was just poor design. Have to study up on that.

tom3 said:
Didn't know that about fans. I always thought having part of the blade out of the shroud was just poor design. Have to study up on that.
Click to expand...

If the entire blade is housed in the shroud the the air will circulate inside the shroud mostly and it will exit along the outer edges of the shroud and not so much towards the middle.

At the cam shop we have a huge square box fan 4 foot by 4 foot run off a capacitor start motor and a belt and pulleys.
2.5 foot pulley on the fan.
Blades have a huge pitch to them but are sitting right inside this square plywood box.

You can stand in front of the fan 5 feet away and feel ZERO wind.
Step over to the side 2 feet and feel wind.
It is so inefficient.
I took a 2 foot pedestal fan up there and it will blow 5X the wind.

We have another fan that is housed inside a steel tube venturi shaped 3" of blade pitch.
24" opening and 24" exit for the wind and it pinches down in the middle to about 16".
The thing is 18" deep. Like the one below.
Man that thing moves some air.
Read about them here. 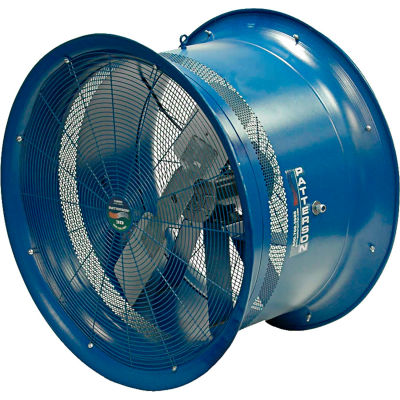 Ours is a 3 blade and I actually have one hanging in my 2 car garage at home.
Pointing a bit down and out the 16 foot wide door.
It will blow air outside of the garage but must have an intake source so the outer edges of the garage will flow air in and it will draw in leaves and cotton wood and anything else that likes to travel in the air.


I have a meter to check air MPH and have not checked that fan but I have checked many factory and aftermarket cooling systems for air flow in front of and behind the radiator.
It is an eye opener.
Buddies 2018 Ford truck is the top MPH generator.
Those fans pull huge amounts of air.
My factory Ford flex fan pulled more air than a buddies GM clutch fan.
I have had a stout clutch fan I hooked up for about 5 miles and removed it.
SO loud and made my belt slip like crazy and actually made my vehicle feel much slower.
Slower to get to top RPM. I gave it to a friend for his stock 1977 TA when he showed up and said his car ran hot. His clutch was shot. 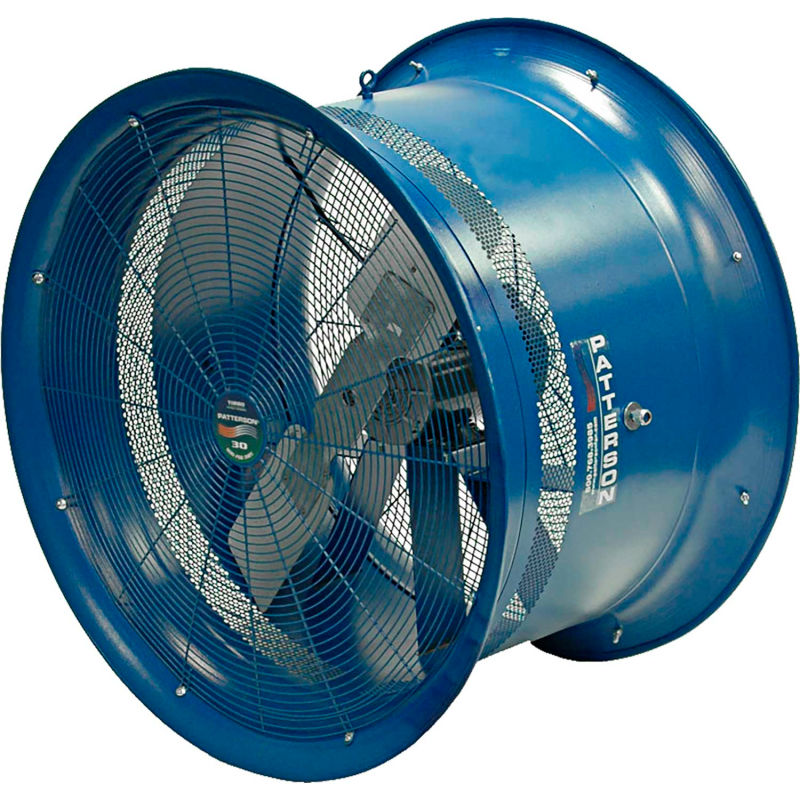