This may seem strange

Bought a used 79 z28 limited slip rearend and replaced axle bearings, checked for bearing movement at pinion. Looked at clutch pack with s spring without removing. Put it in a backed the car up.

Backing up straight it was popping about every foot or two. First thought was the clutches.

Now thinking back on it the s spring was pushing against the clutches directly definitely not the spiders. Never saw that before but assumed it was ok. Haven't had a 8.5 limited slip since around 1985 so my memory is old.

Does the sound right? Taking it apart tomorrow likely. Any thoughts ? Is there a s spring style that the s spring pushes against the clutch pack and not spiders? 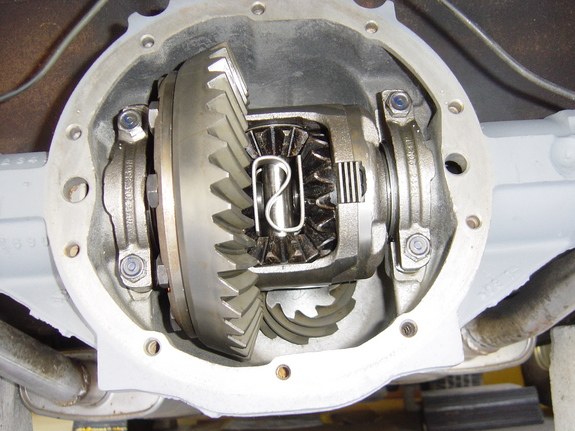 I am likely wrong thinking back and looking at that extremely clean setup. The c-clips had to have a recess to fit into. I'll blame it on heat exhaustion.

But, when I drove it backwards a few feet (mostly straight slight slight curve) it popped making the whole car shudder. And then popped about every foot or two. Did not pop going forward under power driving down the street, but would pop if idling forward. Would wore out clutches do that? I've never had a set that was wore out. I figured that they would slip more not pop.

Drove down the street relatively normal, with a slight pop going around curve.

Not as bad after driving around neighborhood for 10 minutes but still bad. Used the oil that already had limited slip additive in it.

Could previous owner have shimmed it to tight?

I can't help with your problem, but i hope you're not driving it anymore.
F

It's not my daily and only gets driven to test
F

Just checked with torque wrench, in neutral, one tire on ground, it breaks loose at about 50 ft/lbs. So a new clutch pack is going in regardless

When replacing the unit are you sure the u-joint was the right one and installed correctly?

Was a guy here that sold clutch packs for out 10 bolt rear ends. Haven't seen him around lately, but some searching might find him.

This thread mentions the clutch packs for sale.

I remeber someone saying they were no longer being produced by gm. Is there anywhere aftermarket to get the clutch packs. Are they the same as eatons? And are they gov locks?

Did you put in the correct additive? If so then i would check for missing/chipped teeth. the posi only works when you turn and one tire spins faster then the other. Are your tires the same size? U-joints healthy, and the pinon is not moving around?
You must log in or register to reply here.
Share:
Facebook Twitter Reddit Pinterest Tumblr WhatsApp Email Share Link