So I took a look at a 1970 base model Camaro project car and was wondering what the views were here on current values. I know, they are nuts. The car has some great things going for it but it also has some rust issues, real bad.

The owner has had it for a year and hasn't touched it since it was unloaded off the trailer, it has sat outside since. He is not going to get to it and is selling it off. He didn't have any history on the car.

In factory condition this was a beautiful car. Code 10 Classic White paint with a Code 715 Blue standard interior. L-65 2 barrel 250hp 350, automatic trans with console (not sure if original). Factory A/C is still fully intact, factory power steering and power brakes. 10 bolt rear, no sway bar. It was built in Norwood in the last week of production for 1970 (5th week of July). The car fired right up when he sprayed it with starting fluid.

Outside of the rust here is the other bummer. A previous owner clearly wanted a black on black car. It is now painted black and they switched out the entire interior from what seems to be a 73 or newer one. They even switched out the lower dash so it has the fasten seat belt light now.

The body itself isn't horrible. The trunk floor is pretty good and there is no rust at all around the weather strip or by the hinges. The cowl looks real good, no rust at the bottom corners of the wind shield and it even has it's bottom plastic trim pieces intact. The rear quarters would need replacing, the doors, rockers and fenders look pretty good. I think it was in some sort of a fender bender though as the drivers fender is in primer as well as the upper valance. The bumper is mismatched as well, looks like a 1973 bumper? It seemed like it would have been a light accident though, I didn't see any signs of damage that went past the exterior pieces. But it's bad underneath. The worst is in rear frame rails, not surprising. They are just shot as well as the torque box area, completely a mess. That is what stopped me in my tracks. I didn't really get a look at the floor, I got scared when I stuck my finger through the torque box area.....

He had this listed at $7500 when I looked at it yesterday. I politely gave him my feedback and went on my way. Today I see he dropped the price to $6800. Is that about right? Is that totally crazy? Is it close?

What do you think? The 1970 cars are very desirable and this has a few nice options. But it is still just a base model without the correct interior. Now that full aftermarket chassis are available for $15,000 grand or so, maybe the frame rail rust isn't as big of an issue?

What do you think? 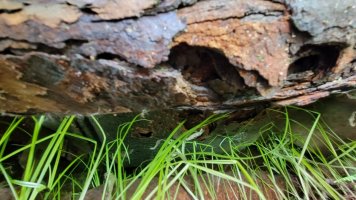 Looking up at what is left of frame rail 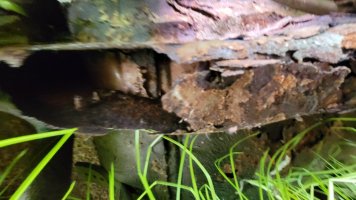 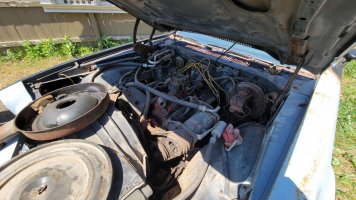 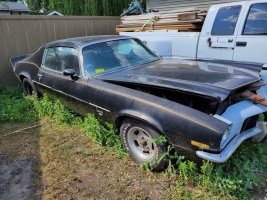 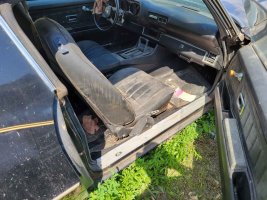 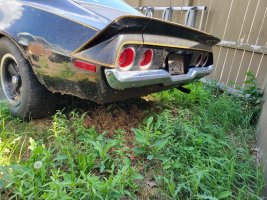 That car will need a full floor pan. I'm not sure how many people realize how expensive actually repairing this car would be. To me, it's 3 to 5 hundred dollar parts car. I see so many completely rotted cars for sale for thousands of dollars. I think if they actually understand cars, they are fishing.

Yes, that's a 73 standard front bumper. Some of that interior could be from a 73 LT as well (argent stripe on lower dash).

I voted for $2500, mainly because the motor does run and it can be saved by someone. The white exterior and blue interior is one of my favorite color schemes. Beautiful. But personally, that frame rust would scare me so I would treat it like a parts car and pay accordingly and then decide later if I want to resurrect it. If not, then I could either make my money back and then some by parting it out or definitely break even and maybe get a little more selling the whole car. Yes, it's a 70 but it's a base as you said that needs a lot of green to save. I think there are better ones out there even if they are few and far between for $6K-$7K. Good luck in your decision.

Badly rusted in critical frame areas. It’s once again a very subjective situation. Huge amount of expensive work and when you’re done you have a cool plain Jane Camaro that won’t be worth nearly the $ you have in it. If you don’t mind spending a ton of money and countless hours you could have a pretty nice car that won’t likely be worth nearly the money that’s in it. Personally I’m not spending more that $1500 ish on it. But, that’s just me.
B

MIght be a good donor car for a Real Deal body??

You can surly find nicer cars, but they will cost more money. Sometimes your time looking is worth money. I agree, if you can get it cheap enough, a real deal body would be great if the car needs a ton of metal work. Are these rare in the area?

Too much work and cash to resurrect that one, IMHO.

Sure, it can be done but I wouldn’t do it.

I have to agree that the price should reflect a parts car.

There are so many 70 specific (expensive) parts to consider in doing a full restoration.

Not a Z, not an RS.
Mallard hit the nail on the head with his post.

I paid 2k for my car in similar condition 20 years ago but frame rails and torque boxes were not THAT bad as the one in your pics. Value has probably doubled by now so it may be worth 4k to someone that can do the work idk. But I probably wouldn't take that on again. I just bout a '71Z with all the metal already replaced which was just a too good of a deal not to buy. I'd rather pay more for a solid body like this one in Colorado are FS in the swap meet. It's not a '70 butt, looks to be a real solid starting point to me.